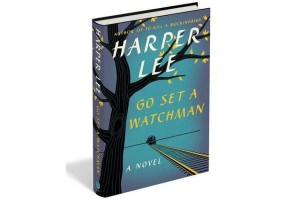 I’m convinced that Harper Lee is full of shit.

She wrote To Kill a Mocking Bird, made millions, and became a recluse.

Then there was this big falling out with Truman Capote.

And all kinds of cranky behavior.

Started suing and threatening people for all sorts of reasons.

Next, she was lovey-dovey with Marja Mills, even encouraging the journalist to move next door to her and to write her biography.

Then, she said nope, she didn’t approve of the biography, in fact, she didn’t even allowed Marja Mills to write one in the first place.

Meanwhile the idiots and suckers of the world waited and prayed and hoped for another Harper Lee book, even when she declared vehemently that she would never ever write another book.

But suddenly, voilà, a “lost” manuscript was found decades later and Go Set a Watchman hit the presses recently.

And the gullible had a massive collective orgasm, lapped the crappy book up, while salivating and drooling like rabid dogs.

And suddenly, double voilà, there’s talk that there may be another manuscript lying around somewhere and a third book may yet emerge. And the world gets another hard on.

I know when I’m being screwed.

And you know what, Atticus Finch, the defender of blacks, and the downtrodden, was actually a member of the Klu Klux Klan.

Well, if you ask me, Harper Lee is jerking with us big time. She’s playing us.

Wait, maybe she herself’s being played?