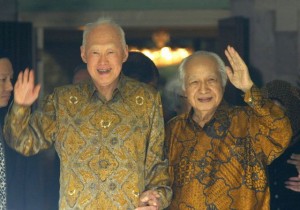 Watching Defense Minister Ng Eng Hen on TV Tuesday the other night I could see he was struggling hard to find the right words when talking about Indonesia and the haze.

ASEAN is the biggest impediment to the haze problem. When we go to bed with our bullying neighbors and have no guts to confront them (because we are just a little red dot that can be easily snubbed out) we are unlikely to see resolution to the haze problem anytime soon.

We are dealing with very unscrupulous, barbaric and savage Neanderthals.

50 years ago, when six army generals were killed by a group of disgruntled junior officers, Major General Suharto took the opportunity to seize power in Indonesia.

He blamed the leftists for the murder and launched a genocide. As a result, more than 500,000 fellow Indonesians were killed and at least another 750,000 were tortured and sent to concentration camps.

The victims were labeled “communists” and Indonesia came under a haze of terror to the extent that people there were afraid to eat fish, for fear that fish were eating corpses.

Unlike the Nazis, or the Khmer Rouge, those responsible never had to face any accountability. Killers of yesteryear continue to brag about how they tortured and killed. You can see them merrily boasting about their exploits in an utterly disgusting film produced by Joshua Oppenheimer, entitled The Act of Killing.

Suharto evolved into a good friend of Singapore. We welcomed him – and kleptocrats of his ilk such as Than Shwe and other buffoons from Burma – with open arms. We continue to welcome the descendants of crooks like Marcos, some of whom have made Singapore their domicile and are still living here.

As for Indonesia, over a period of almost 30 years from the 1970s, an excellent relationship existed between Indonesia and Singapore.

As Suharto was dying, Lee Kuan Yew paid him a visit after which Lee said to the press “I feel sad to see a very old friend with whom I had worked closely over the last 30 years not really getting the honors that he deserves. Yes, there was corruption. Yes, he gave favors to his family and his friends. But there was real growth and real progress.”

No Rules of Prudence then huh?

Ok to sleep with the enemies huh?

Fact: If you are held ransom, you cannot confront.

You may even side with the kidnappers.

That’s Stockholm Syndrome in a nutshell.

(Stockholm syndrome is named after the Norrmalmstorg robbery of Kreditbanken at Norrmalmstorg in Stockholm, Sweden, during which time the hostages expressed empathy and sympathy and harbored positive feelings toward their captors, to the point of defending and identifying with their captors.)

So they got us by the scrotum.

And that’s why dealing with the Indonesians is as delicate as walking on eggshells.

And that explains why an otherwise eloquent Ng struggled to find the right words the other night.

Given our small size and our vulnerability, Singapore government’s stance towards Indonesia is not completely irrational. Then again, a broken clock is right twice a day.