43 Years and No End in Sight 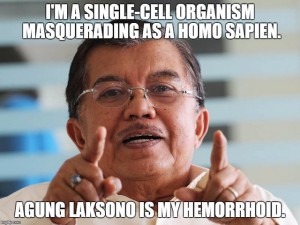 How long do you stay sick before you consult a doctor?

One hour, half a day or one day?

Well, The Straits Times recently showed evidence that Singapore has been grappling with the haze situation for 43 years! The paper also quoted NASA saying this year’s haze will go down in history as the worst ever.

43 long years, but are we close to solving it?

Indonesian president of vices, er, I mean, vice president, Jusuf Kalla (that’s the primate-looking monstrosity in the picture above whose IQ is smaller than his shoe size and whose EQ is less than that of the stray dogs in my estate) and semi-evolved creatures like him still stuck in the trees in the jungle even made sarcastic comments when Singapore expressed our concern.

The first thing I do when I get to heaven is to ask God how do idiotic morons of the highest order such as Kalla get to be vice presidents of countries?

He was an Indonesian minister who once hit out at Singapore on the haze, saying “Singapore shouldn’t be like children, in such a tizzy.”

Bright fellow, even knew how to use the word “tizzy.”

He was another vapid pus bag who remarked that Singapore said nothing when there was fresh air (as if fresh air was Indonesia’s to give) but complained about the occasional haze from his wonderful country.

I say, get that cretin a dictionary!

If you’re curious how a failed abortion looks like, may I present Indonesia’s second-smartest chimpanzee, after Kalla: 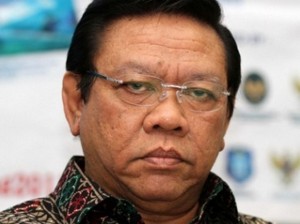 Please remember how these nincompoops look like, in case they walk into you.

I don’t want you slapping the wrong retards.

These single-cell organisms masquerading as homo sapiens reside in a country that spends over 40 years trying to poison us yet they still have the gall to poke fun at us.

It’s time to let them have a taste of their own medicine.

Yup, slap them right back into their mothers’ wombs!