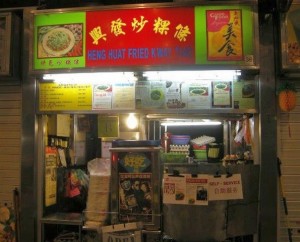 Only masochists will eat at this stall operated by a rude sadist.

When I wanted to buy four fillets of assam fish home the other day, the stall holder at St Michael Bus Terminal told me he could only sell me two pieces; otherwise, he won’t have enough for his other customers.

It was only 11:30am in the morning and he had a whole tray of assam fish that could feed an army plus full trays of other dishes.

Long story short: I walked away. No time for idiots. Why vomit blood over a trivial matter right?

He not only lost the opportunity to sell me two fillets of assam fish but he has also lost a customer for life.

For the sake of racial harmony and all, I will not comment on the race of the stall holder or the type of “cuisine” he sells.

But stupidity is not confined only to certain races.

When I was young I used to accompany my mother to the market and I recall occasions when she wanted to buy pork liver but could never buy the amount she wanted because inevitably the pork seller would say something like “I can only sell you a little, so that my other customers can buy too.”

To me, that’s mere stupidity.

Food sellers with attitude, those who are stuck up or rude – they don’t get my business.

Stories proliferate of long lines of customers who don’t mind being insulted despite having to deal with bad-mannered and discourteous food sellers such as that pus bag frying noodles at the Heng Huat stall (picture above.) In my opinion, these customers are as retarded as those food sellers.

What in the world would make those food sellers drive away ready customers who would buy up more of their inventory rather than to horde their stock for future customers who may or may not materialize?

I’m sure there is a logic there somewhere. One can never fathom how Neanderthals think.

What in the world would make those cretins behave in a manner that will turn away income?

What in the world would make people continue to stand in line to be insulted?

That I cannot understand.

I insult kings and prime ministers.

No way am I going to allow myself to take shit from food sellers who rely on me to feed their families.

That stupid simian at St Michael Bus Terminal can shaft his whole tray of assam fish fillets up his rotting ass for all I care.