Let’s Withdraw our Offer to Help 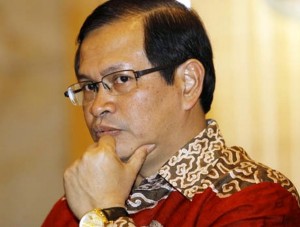 Step aside Jusuf Kalla, you have competition now haha!

Indonesian Cabinet Secretary Pramono Anung told CNN on October 7th that Jakarta had earlier rejected Singapore’s offers of assistance to combat the transboundary haze crisis in the region because it was concerned that Singapore would claim credit for solving the problem.

“It is our government that is working hard to resolve this so we do not want it to reach the point of them claiming credit for it,” Anus, er, I mean, Anung told CNN.

I hope one day he’ll choke on the crap coming out of his mouth.

His country is creating a shitstorm in the region but he’s more concerned about who’ll get the credit for fixing it.

Definitely an odious retard of the worst kind.