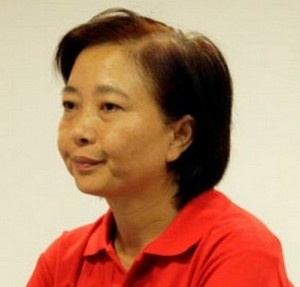 Google Lee Bee Wah and you will walk away with the idea that she probably had had a bad childhood during which she was neglected or perhaps even abused, with the result that she now craves attention by attracting controversy after controversy.

Remember the table tennis shitstorm she caused in 2008?

Then there were allegations that a company she had connection with was awarded a contract in an area where she was in charge of.

And what about her lewd comment in parliament about how people rush for toilets only when they are about to defecate? That remark marks her down as the most ill-mannered, most uncouth, most unrefined and most vulgar member of parliament ever, when she used a very rude Hokkien expression “ai pang sai ka che jamban.” That statement remains today, in Singapore parliament, the crudest line ever uttered, by any member of parliament, living or dead. If you don’t believe me, go pour over Hansard. Seriously, I wonder where this auntie got her doctoral degree from.

And now Lee wants all of us to be spies and to spot litterbugs and to reward us for snitching on our fellow men and women by giving us a portion of the summons payment or fine imposed on the litterbugs after we have submitted evidence of these litterbugs caught in the act.

This multi-racial, multi-religious society is already so fragile and Lee wants to do this, nevermind the fact that this stupid suggestion smacks of such bad taste to begin with. As a matter of fact, she has suggested this to the National Environment Agency a few months ago and hoped to roll out a pilot in Nee Soon South. Whoever agrees with her must be a world-class moron. And whoever thinks he can turn this into a full-time job spying on people who litter ought to be lynched in the public square by vigilantes wearing pointed white hoods over their heads.

Like the lèse majesté law in Thailand it will be misused, I guarantee you. All kinds of retards will start setting up video camera in front of their enemies’ homes. For some pocket money, some scumbags won’t even hesitate to turn their own mothers in. Soon planeloads of mercenaries under the control of criminal syndicates will fly in from China, Vietnam or Thailand to bounty-hunt for litterbugs. There are already fake monks and tissue sellers proliferating here.

Civic consciousness should not have a price tag to it. Education is the key. Social engineering and brainwashing for which our most enlightened government is master of is still the preferred way to go. Do we want to see a day when witnesses to a murder must be incentivized to come forward to furnish evidence? Do our cops need extra monetary rewards to do their work such as those comedians in Thailand? Or have all the years of government campaigns failed? Are people numb to constant brainwashing? What else would work? Surely not spying on each other? What kind of a society are we trying to build if we have to constantly look over our shoulder? It will be a society torn asunder. Lee Bee Wah’s idea is a frigging dangerous one!

I suspect the auntie must have some Indonesian blood. She seems to be trying so hard to outdo the likes of Jusfu Kalla and his bunch of Neanderthals.