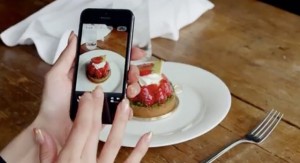 Don’t people give thanks for their food nowadays?

Nope – they take pictures of their food.

Some blog. Some declare themselves to be food or lifestyle bloggers.

I know a few will actually asked for money before they blog about an eatery.

Then they are some who bully restaurants into giving me free meals so they can blog about them. Some of these morons can’t even write well to save their lives.

A shameful lot of parasitic vermins, that’s what they are.

Ordinary folks have caught the disease too.

Sharing on social media about living the high life seems to be the norm.

Most shares are really boasts.

These pathetic souls hope their thousands of “friends” will “like” their posts. They live with the hope that their posts will be favorited, retweeted and what have you.

As for those “professional” bloggers their days may be numbered.

Consumers are often tempted to try out new products or services because of glowing testimonies by users of social media.

The Advertising Standards Authority of Singapore wants individuals who are hired to tout products and services to make it clear when they are publishing sponsored messages, under proposed new guidelines for digital and social media advertising.

Earlier this year, Singtel was rapped for a smear campaign against its competitors run by Gushcloud, a social media agency it had engaged. The campaign involved social-media influencers making fake complaints about M1’s and StarHub’s services on social media, in return for incentives such as cash and discounts on mobile phones.

Even if a blogger is writing his genuine thoughts about a product or service provided by a company he has a commercial relationship with, he should declare the relationship in the post, ASAS proposes. Also, firms should not mask advertisements by publishing them in a blog format that makes content seem like they come from an impartial and credible source, the authority added.