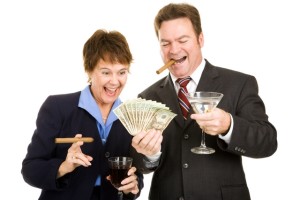 Overseas, at least they dress better.

Things aren’t getting any better here.

Not long ago, an Internet user with a rather provocative and racist nickname – Bangla something – wrote a review of a hotpot restaurant on HungryGoWhere.

The review stood out because not only was it then the single negative review of the eatery, it was peppered with racist comments.

The reviewer showed no understanding of food, not just Chinese food, but any food, and clearly the review was not about food but was a disguised attempt to heap scorn on a certain group of people. Terms like “Ah Tiongs” were used liberally and the post even said that the food tasted of “Ah Tiong smell.”

Common sense dictates that if the majority of reviewers have posted negative comments then perhaps the eatery named is indeed not up to par. But when nearly all comments are laudatory and only one review stood out as vehemently and toxically negative, then something clearly is not quite kosher.

It caught my attention.

I am not in any way associated with the owner of the hotpot restaurant which is operated by people from mainland China, but felt compelled to email HungryGoWhere to alert them of my concerns. The result was that the offensive review was removed.

Imagine yourself in a land as different as it is from the land of your origin, with people who look different, who don’t yet understand your language or your culture. Do you want them to look at you askance and treat you like some strange creature and use derogatory terms to refer to you?

But that’s not the worse about food bloggers, even among the more genuine ones – meaning those who actually write blogs – are lots of parasites who prey on restaurants to get free food.

Because Singaporeans do not hesitate to spend on food, there’s big money to be made here even by people not directly associated with the F & B business.

There is even a very infamous case of someone who is on a food guide panel who would strut into restaurants, flaunt her name card denoting her as a food guide panelist and demand to be treated like a queen. Looks like she has eaten her way up the food chain, huh?

Vermin like her should seriously consider getting a real job for a change. Shameless, really. Nothing more than just a beggar, to be honest.

Others simply set up blogs – and some can’t even write for nuts to be honest, the standard of English is more than just appalling – then create lists on their blogs to suggest that they know, say the top 10 best seafood buffets in Singapore, or the top 10 this or the top 10 that, and web surfers, being curious, will click on those links and therefore drive traffic to their sites.

With the statistics purportedly showing high viewership, (which is also a reason to charge for ads) they then visit restaurants and ask if the restaurants want to be reviewed, and when restaurant owners bite, (pardon all the puns in this post) these bloodsuckers will then move in for the kill. There is a price to be paid if you want your restaurant to be reviewed, and there’s an ever greater price to be paid if you want the review to be positive – money changes hands in addition to a free meal for the blogger and his or her companions. Some bloggers are known to ask for ten, twenty thousand bucks or more to pen just a review. Positive reviews cost considerably more.

Didn’t someone once said that the Internet brings out the worse in people?

A long time ago, in a galaxy far away, someone I know fabricated a non-existent wine, wrote a review about the wine (complete with pictures of a fake label), and said that it paired extremely well with food of a particular cuisine served by a particular (non-existent) restaurant. My buddy even included a fake menu that looked believably real.

Like bees to honey, before you know it, all the bloodsuckers quickly crawled from the woodwork and they lapped it up big time. On cocktail circuits, you hear people heaping praise on the wine, rating it a 90-pointer at least, and according the restaurant Michelin-like status. Tons of emails were received from food bloggers offering to write positive reviews of the wine and of the restaurant, for a fat fee of course, in addition to free meals.

We split a gut over that one. Yup, my buddy and I had a good laugh.

Moral of the story: eat what you like, take food reviews and gourmet guides with a pinch – sorry, I mean a large tablespoonful – of salt. Also, do you know that many food bloggers are not single solitary individuals (even though their blogs give the impression that it’s written by some ordinary foodie with an innocent-sounding name), but actually a group of freeloading parasites masquerading as one person? They are tricksters out to rip everyone off, that’s what they are.

Yup, that’s the extent of the deception. What a racket, right?

Don’t say I didn’t warn you.