Soon to be Banned 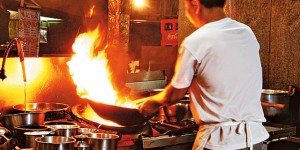 His days are numbered.

Recently a brain-damaged retard was provoked enough to write to the press when a whiff of tobacco smoke in an eatery annoyed her to the extent of her proposing that The National Environment Agency should make it mandatory for eatery owners to put up physical partitions between smoking and non-smoking sections.

“This can be done by using a polycarbonate screen or one made of some other suitable material,” she advised. “It can be a permanent or temporary structure. A screen barrier would help to contain the harmful tobacco smoke, preventing it from wafting over to the non-smoking area.”

Screens to block Chinese from Indians, Filipinos from Malays?

Barricades to separate foreigners from locals?

Compartments to keep children away from adults?

A ban on incense-burning, stir-frying, barbecues and satays – too much smoke lah, bitch!

A ban on butter, palm oil and ghee – too unhealthy lah, bitch!

And since we’re in a banning mood – how about banning earsplitting events like Thaipusam, Malay weddings and Chinese funerals?

How about eugenics? How about sending brain-damaged retards to the gas chambers?

Sure, play with fire. Sure, walk on thin ice. Sure, dance on egg shells.

Sure, every crybaby should go urging the government to take action on things that irritate!

Have you forgotten that you can move to a far corner in the non-smoking zone?

Seriously who died and made you an expert, bitch?

What happened to all that talk about being tolerant, to live and let live?

Aren’t your own farts toxic and lethal enough?

Aren’t your own thoughts killing you?

Is that why your brain is damaged?

Study after study by psychologists have shown that people judge you based on two criteria when they first meet you – can they trust and can they respect you?

Bitch lost on both counts – clearly she cannot be trusted to co-exist in cohesion with other human beings and her moronic ideas certainly win her zero respect.