One Group of People we Should Not Ignore 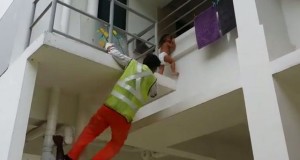 Singaporeans would rather remain photo-taking spectators.

There is a group of people I refer to as “landscape people.”

These are the unsung heroes constructing our buildings, keeping our premises clean, empting the trash, clearing our utensils and cutlery at eateries, etc.

For the most part, we ignore them and don’t even engage with them – they are being regarded as part of the landscape, hence the term “landscape people.”

Few will deny it but most of us harbor prejudices about these people, many of whom are foreigners.

Some of us view them with disdain.

This is ironical considering that we are known to be a melting pot, a multi-racial society; after all, we pledge to be one united people, regardless of race, language or religion.

I mingle and mix with just about all kinds of people.

Not just those of the same ethnicity as me, but also the non Chinese like the Malays and Indians among us.

But I know of many Singaporeans who do not have a single friend outside their racial group.

Among my friends are the highbrow ones – well, some of them consider themselves to be highbrow (in addition to being well-heeled) anyway – who occupy senior positions in government and corporations.

But I am happy to say that I also have friends who are taxi drivers, cleaners and sweepers – hoi polloi.

No, I am no patron saint of the sidelined and the cold-shouldered but as I grow older, I often try to put myself in the position of other people and often ask myself “if the roles are reversed, how would I want to be treated?” (Even if you’re only 15, sometimes that’s all it takes to wake up your fucking ideas – yes, put yourself in someone else’s shoes.)

Of course some foreigners, understandably, become wary if one tries to be too friendly, simply because most of them are not accustomed to the approachability of strangers, especially Singaporeans.

Being Singaporeans we have much to be proud of – and truth be told, not necessarily because we ourselves actually did anything to get to where our nation is, but that’s another story – and because we think we are successful, we have become an arrogant, cocky, proud and haughty lot.

I joke with the cleaner who empties our trash bins, I chitchat with the intimidating-looking bearded Bangladeshi laborer who washes our corridors and I try to engage in banter with the silent majority whom no one talks to – the carpark attendant, the postmen and women, the courier delivery person, the karung guni men, the pizza delivery person, the cuci kereta guy, the workers at the laundry I send my clothes to, those women who go around car parks issuing fines to those who park without paying, even the Customs officers when I go to Eunos to collect my overseas online purchases.

I’m not doing this for myself, not trying to assuage my guilt over past bad behavior or anything like this.

Maybe I was touched by the acts of compassion and valor I learn through the media about how foreign workers went out of the way to help rescue a baby whose head was stuck in a balcony grill (one of them is shown in the picture above) or the brave fellow who risked his life in the heavy downpour to save a cat about to drown in a monsoon drain.

Maybe my heart suffered pangs of something – I don’t know what –  when I read about that visibly dog-tired and weary foreign worker who didn’t dare sit in the MRT until someone assured him it’s ok, please sit, seats are not just for locals.

Now I worry about the Bangladeshis in our country.

27 of their countrymen were recently arrested in Singapore and repatriated for terror links. (Some were planning to conduct extremist activities in Bangladesh.)

I hope we don’t look at every Bangladeshi we meet and assume that he is a terrorist hell bent on blowing up our country.

I’m generally an asshole (by choice and by conditioning) and not a forgiving person but I wish at times like this we can reach out and assure the foreigners in our midst that we who have the “mostest” of everything are also a nation with a big, discerning heart who will not taint all foreigners with the same brush just because some were bad hats.

So the next time you see foreigners among us, don’t act hostile and try to smile. They are working hard at jobs we despise and at salaries we don’t want in order to provide for their families back home. Please don’t assume they are all here to harm you.

To be honest, you’re more likely to be stabbed in the back by one of your fellow Singaporeans – maybe even someone from your church – than by a foreign worker.

Trust me, I’m speaking from experience.