The King who Meant Business 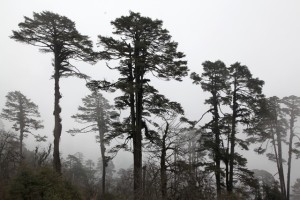 The view at Dochula.

In this day and age, can you find a king who will personally lead his army to war?

Well, the 4th King of Bhutan, Jigme Singye Wangchuck – affectionately known as the Druk Gyalpo – did in 2003.

Indian rebels from Assam, wanting their separate state have been camping in Bhutan territory for over 10 years in order to launch attacks into India. This made life difficult for the 65,000 Bhutanese living in the affected area.

The handsome King Jigme Singye Wangchuk of the tiny, land-locked, sparsely populated Himalayan kingdom of 700,000 tried negotiating with the rebels and even offered to pay them off but they continued to occupy Bhutanese lands from which they launched their acts of terrorism towards India.

According to our guide, the last straw came when some Bhutanese school girls were massacred by the rebels while trekking in the area.

India then offered to come into Bhutan to clear the rebels, but the wise king knew that if the Indians were allowed to come in, they may never leave. I am sure the king was well aware of what India did to Nagaland, Sikkim and Ladakh, so in 2003, the then 48-year-old king led an assault himself and drove the rebels out.

It was a successful campaign but 108 Bhutanese soldiers lost their lives.

My wife Yuyin and I traveled to Bhutan with Druk Asia, Bhutan Travel Specialist and General Sales Agent for Drukair, Bhutan’s national airline. We were in this most extraordinary of countries of dizzying beauty from March 10th to 16th this year and among other places, we visited the Dochula pass, located on the way to Punakha from Thimphu. The pass is a popular location among tourists as it offers a stunning 360 degree panoramic view of the Himalayan mountain range. The view is especially scenic on clear, winter days with snowcapped mountains forming a majestic backdrop to the tranquility of the 108 chortens gracing the mountain pass. These were built as a memorial in honor of the Bhutanese soldiers who were killed in the December 2003 battle against Assamese insurgents from India.

The wise and much-loved king abdicated in favor of his eldest son, Jigme Khesar Namgyel Wangchuck, in 2006. 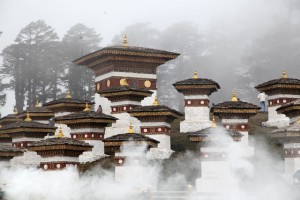