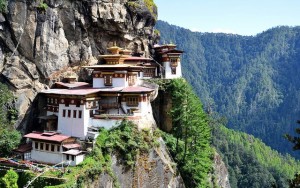 For once I am at a loss for words.

You have to experience Bhutan to know it for yourself.

No picture can do it justice.

The beautiful mountainous Himalayan kingdom is truly a Shangri-La. (Television didn’t arrive till 1999.) 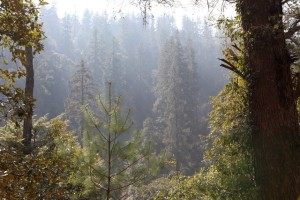 There is so much I can say about Bhutan, but words are sorely inadequate.

Seriously, you’ll have to visit to experience what my wife Yuyin and I experienced.

My wife and I traveled to Bhutan with Druk Asia, Bhutan Travel Specialist and General Sales Agent for Drukair, Bhutan’s national airline.

It was indeed a trip of a lifetime.

The kingdom is secluded in the eastern Himalayas between India and Tibet and is about the same size as Switzerland. It was isolated from the outside world for three centuries. (Tourists were allowed in only from the 70’s onwards.) Prior to that, Bhutan was inaccessible.

Though often thought of as one of the least developed countries of the world, this does not reflect the reality of life there. The economic condition of the Bhutanese cannot be compared with that of inhabitants of Africa or other parts of Asia who fall in the same category. Some 95% of Bhutanese peasants own their land, housing is of generally good quality, there is no famine and there are no beggars.

Slaughtering of animals is forbidden and all meat is imported. All vegetables and fruits are organic.

The strange-looking takin, a giant antelope, described by some as looking like a bee-stung moose, is Bhutan’s national animal and is protected by law. 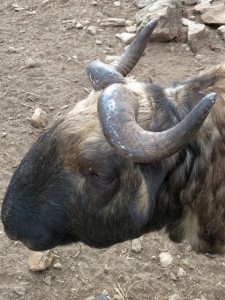 The national dish is a very tasty dish of chillies cooked in yak cheese and eaten with red rice.

Bhutan has excellent beer and whisky too. 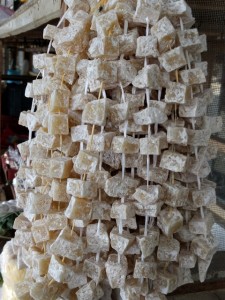 Yak cheese being sold at the market.

Despite its’ hilly terrains and mountainous landscape, electricity reaches almost the entire kingdom.

Maximum forestation is a national goal, and every tree felled must be replaced by three. Presently, 72% of Bhutan is covered with virgin forest, making it the only carbon negative country in the world.

Education and healthcare is free.

People are friendly and good looking. Our encyclopedic guide Chunjur is a blessing – an eloquent and articulate young man who speaks several language including fluent Korean, he is a fount of knowledge and information and was extremely caring and patient with us.

We will also never forget the friendly Passang Drukgyel, the owner of the only hotel (14 rooms) in Lobesa. He gave us his best room and made it a point to banter with us at breakfast.

And at Metta Resort and Spa, owned by a Malaysian lady, Sharine, and her husband Tshering Togbay, we enjoyed the best massages ever. Tshering Togbay made it a point to speak to us at every mealtime. He even offered to cook us nasi lemak and bak kut teh and on the day of our departure, Teochew porridge was prepared for us at 5am in the morning.

The Bhutanese men are handsome and the women beautiful. I have never seen so many good looking people before. Members of the royal family all look like K-pop stars – sans makeup and plastic surgery!

George Bogle wrote in 1774 that the Bhutanese “are the best built race of men I ever saw.”

But you need to be fit to visit this kingdom where Gross National Happiness is priced above GDP.

Every place of interest requires a steep ascent. Hence, if like me, you have a bad back, and huff and puff, Bhutan can be a challenge for you.

My wife and I were also at the snowy Chele La Pass, which at 3,988 meters above sea level is the highest road pass in Bhutan. The temperature was minus 2 Celsius when we were there and strong winds blew my phone off my hand when I tried to take a selfie with Yuyin. The view was breathtaking, it swept away to the snow-dome of Bhutan’s second highest mountain, Mount Jhomothari (7,314 meters) and down to the unspoilt Haa Valley, which only allowed foreigners to visit in 2002 due to its proximity to the border with Sikkim and Tibet. 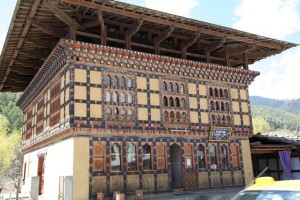 A building in Haa.

A most remarkable spot in Bhutan is Paro Taktsang, the popular name of Taktsang Palphug Monastery (also known as Tiger’s Nest), a prominent Himalayan Buddhist sacred site and temple complex, located in the cliffside of the upper Paro valley. The temple complex was first built in 1692, around the Taktsang Senge Samdup cave where Guru Padmasambhava, also known as Guru Rinpoche, is credited with introducing Buddhism to Bhutan. He is believed to have landed there on a flying tiger – actually his consort Yeshey Tshogyal in a different manifestation – hence the name Tiger’s Nest.

You could go up on horseback but if I were to reach the monastery, as a matter of personal pride, I would want to do it on my own stamina, and not by using “horsepower.”

But Yuyin, being fit and full of vigor, trekked all the way up while I sat on a rock at base camp, chatting with the rugged old ladies who kept horses for those who wanted to use them. Yuyin’s entire sojourn (to and fro) took four hours. All in all, according to our guide (who kept count) my dear wife walked 17,705 steps, covering 12.1 kilometers and 106 floors to reach 3,192 meters above sea level!

Her reply “You bet!”

I couldn’t agree with her more.

There may be a Tiger’s Nest in Bhutan, but the simplicity and friendliness of its people, the boundless hospitality we experienced and the great warmth that greeted us everywhere we went, remind us more of being in a home-like cocoon of comfort, a love nest, if you will.

It is a safe haven we long to return to some day in the future.

Perhaps we will live out our sunset years there.