Received this from my Member of Parliament, David Ong: 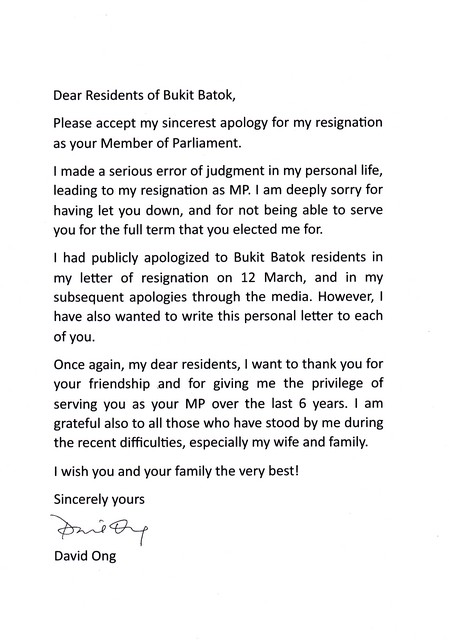 Thank you for your letter – in four languages no less – which I found in my mailbox last week. My mailbox’s anti-junk mail catch was engaged but yet your letter was in there. Did you pay SingPost – they have the master key – to do a mass mailing?

And, by the way, may I call you “David” instead of “Mr Ong”? I mean, you are as human as the rest of us, aren’t you? Plus “David” has a nice, folksy ring to it. Brings people closer to you, right?

As for being as human as the rest of us, I’m sure you are, and that’s probably one reason why you got yourself in such a, ahem, sticky, gooey mess.

Your apology is appreciated but utterly unnecessary.

You’ve reiterated that you have already apologized – once to my fellow Bukit Batok residents, and again in your subsequent apologies through the media – so why do you need to apologize again? How many times do you need to apologize? Or should I ask “How many times do you WANT to apologize?” There’s a big difference between needs and wants, I was taught since young. Some are saying that your repeated apologies tantamount to flaunting about your extramarital affair, others think you are trying hard to assuage your guilt.

As for me, truth be told, I have long written you off but the thought that, despite the fact that you have already resigned, yet trees were chopped and tax payers’ money spent, so that your letter of apology could be spammed into every mailbox in the constituency; rammed down my esophagus, has re-ignited dormant anger in me, to put it mildly.

A number of things upset me, David.

First, when you were an MP, I have never met you. Perhaps I am one of those in your constituency who have no real need to have a face-to-face meeting with you. So I supposed not having met you is ok. Oh, lest I forget, I did see you once at the market, you were like a celebrity surrounded by a whole bunch of minders as you blazed through the market like a whirlwind. You seemed so busy and in such a hurry and at that time, I thought if I had a real need to meet you, it must have been rather difficult. You were enveloped by a shield of protectors who seemed very determined to keep you away from hoi polloi like me. I also thought to myself how lucky I am because I can talk to God any time I want, but with MPs, one can never know. I hear you need to take a queue number and wait for hours and so on. Wow, bloody impressive.

Secondly, in the larger scheme of things, your little naughty misadventure – or should I say adventure? – pales by comparison to the important issues of our times. David, people are losing their jobs, the economy is not as vibrant as it used to be, brand-name retailers are pulling out of Singapore, terrorism is a real threat. Home Affairs Minister Shanmugam has already publicly warned that it’s not a matter of if, but when, Singapore will be attacked by religious extremists. Last Friday, The Straits Times even screamed that the home turf has now become the new battlefield. We are on tenterhooks, actually. I am nervous. Parliament just revealed that more soldiers – soldiers, mind you – will be seen in public patrolling. We live in a world with clear and present danger. No one cares about brats from inner circles quarreling like kids over newspaper columns that got edited because it was shittily cobbled together or heavily plagiarized and believe me, no one cares who’s copulating who, David.

But you chose to dwell on your affair, yet again. Oh, come on. Seriously, you think people really care where you dipped your dick in?

Thirdly, you may be contrite and all, but why beat yourself on the head repeatedly? So you had an affair, you have confessed, asked for privacy for your family, so move on, for goodness sake. Focus on your wife – she is the one who is hurting the most. Think of your children – they won’t know where to put their faces. No need to remind everyone in the public arena that while we were all working hard, making ends meet, you were happily humping a grassroot leader. We are already so envious, and feeling like losers when some of us who look like Korean soap-opera stars still have to resort to taking matters into our own hands via onanism (David, that word means “masturbation”) while balding uncles like you get to screw pretty women. Enough lah!

Perhaps you feel good with some self-chastisement but this is not a communist country, there is no need for self-criticism or self-flagellation. Get on with your life, David.

Moreover, if you are really sorry and remorseful, don’t just waste paper and waste words, go take refuge in a temple, shave bald, wear sackcloth, rub ashes on your face, be a monk, stay celibate, become vegetarian, study theology, meditate in the mountains, join a church, be a pastor, do whatever works, and really really atone.

I mean, come on, David, let’s be honest. If not for Wendy’s husband “complaining” to the powers that be about your trysts with Wendy (ah Wendy, Wendy, what a nice name) you two would have carried on, and on, right? I am a man too David, and many of us have had Wendies in our lives as well. We know what this is all about. It’s so addictive, isn’t it, this business of furtive glances, sneaky rendezvous, quickies whenever there’s an opportunity, blah, blah, blah. “Serious error of judgment” indeed. The phrase should apply to Wendy’s husband really. What a wimp! Other men would have just bashed you up but this ball-less cuckold went to file a compliant instead! Anyway I digressed. I was about to say let’s call a spade a spade, David. You two were fornicating behind your respective spouses’ backs, for crying out loud. Anyway, maybe you were just unfortunate to belong to a political party that prides itself in being as ethically pure and as pristine white as the “uniforms” you all wear, high moral grounds and all that horseshit, so no choice, you must do the honorable thing, you must be let go ala Michael Palmer.

Fourthly, your esteemed colleague helming the health ministry has already merrily declared in parliament that we don’t have a culture of naming and shaming. Instead ours is a culture of learning. In one fell stroke, he absolved himself of all accountability and distanced himself from all of his ministry’s wrongdoings. Well, then learn, dear David. Learn! Mas Selamat got away and that shorty, that Rumpelstiltskin-like minister, another uncle like you, continued smiling while some fall guys took the rap. In some countries for the recent hospital Hep C infection fiasco, the health minister would have stepped down by now; by the same token, some other countries’ transport minister would have resigned in the face of that recent unfortunate accident at the train tracks when two of our able-bodied young men were cut down in their prime while attempting to carry out maintenance work. But did anyone at the top assumed accountability? No, because that’s not our culture. Well, maybe we should stop naming criminals when our newspapers report about them huh? Or does not naming wrongdoers only apply to a select few? What do I know? I’m just another nobody, another parasite hanging out at local kopitiams, incoherently voicing my wild, uneducated thoughts.

So David, please, enough is enough. This gets very tiring, if you know what I mean.

Come to think of it, if enough is not enough, well and good for you, isn’t it? Now that you don’t have to appear in virginal and immaculate white and act like a saint, you can have many more Wendies in your life. No need to keep your pecker in your pants anymore, right?

Whatever it is, David, it’s your life.

I’m busy trying to eke out a living in these difficult times.

So please, please, don’t irritate the hell out of me again, please.