My Thoughts on Nur Diana Muhammad Ismail and Denise Phua 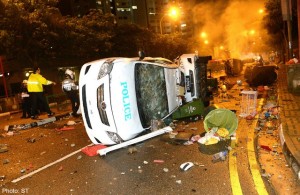 36-year old Nur Diana Muhammad Ismail had wanted to hold a fair selling apparel at Tampines 1’s atrium in May just before the start of the fasting month.

The email from the mall that says “We are not so keen to run a Malay road show as our target audience is mainly Chinese. Thus, we regret to inform you that we are unable to rent a space to you” upset her so much she made a police report.

Member of Parliament Denise Phua, when speaking about crowds in Little India said “congregations of such high density are walking time-bombs and public disorder incidents waiting to happen.”

And people got upset. The media reported that it caused “an uproar.”

First, that email was rude and terse. The writer could have worded it differently. But rude and terse emails are the order of the day, not that such a tone makes it right. (You should see the mails I received!) The fact that it was email (it means “electronic mail”) often necessitates a quick, short, to-the-point reply. To many, an email is often regarded as a message slightly longer than a SMS text, or a tweet. And like all forms of electronic communication using limited texts, emails are often misunderstood and cause a reaction because they are often devoid of warmth or any feeling – except negative ones for some reason – that accompany them. If the mall person has any brains and is not an idle, lazy sloth, he or she would have picked up the phone to explain the mall’s side of the story to the woman. In the olden days, the mall representative may even invite the woman for a chat over a cup of coffee to explore various other options with her. After all, the mall owner also operates other malls and it is just plain stupidity in the current economic conditions to turn away business, any business. It’s all about EQ, basic courtesy, and being commercial-minded. Unfortunately, too many retards today think they can solve the world’s problems with just an email.

As for Nur Diana Muhammad Ismail making a police report, my humble opinion is that she has over reacted. Yes, if I were in her shoes, I’ll be pissed too. But will I be so enraged as to make a police report? Well, I can’t say for sure but what I can say for sure, is a question, and that question is what will the police do after receiving my report? She has already used social media to vent her frustrations and to air her anger. To be honest, that’s a lot more effective and therapeutic than running to the police station to make a report, in my opinion, that is.

Her concerns are valid. Let’s not forget the riot in 2013 when 300 migrant workers from India caused destructive havoc for two solid hours in Little India, 25 emergency vehicles were damaged and five were set on fire. Video footage uploaded on the Internet shows rioters pushing police cars on their sides and setting an ambulance on fire. Let’s not forget that 39 police, four civil defense and auxiliary officers were injured.

Let’s also not forget that this was the second riot in post-independence Singapore, and the first in over 40 years since the 1969 race riots. Think of the damage it did to our reputation as a country. Such acts of civil disobedience could lead to our Götterdämmerung.

And let’s not forget why alcohol is now banned in Little India.

Take note that Denise Phua did not specficially refer to the Indian migrant workers frequenting Little India on weekends and packing the place like sardines as walking time-bombs, but she couldn’t have used a better expression, in my opinion, and no apology from her is necessary. And it’s an expression, a figure of speech, not meant to be taken literally. She didn’t mean that there are Indian foreign workers in Little India on weekends walking around with self-detonating bombs, timed to explode at certain times, strapped to their bodies.

For goodness sake, if your English is so bad, take advantage of the SkillsFuture Credit scheme and brush up on your English lah!

Plus, come on, let’s not all be so hypersensitive.

Feel discriminated against? Go report police. Pissed off with a term used by an MP concerned about her constituents’ safety, cause an uproar. Hey, report police and post on Facebook leh.

Wedding photographs turned out shitty? Report police! Post on Facebook! (Obviously the couple should have considered cosmetic surgery, or just cosmetics – lots and lots of cosmetics!)

Anyway, you think the police got nothing better to do ah?

What the fuck are we?

If you want to be a crybaby, hire a babysitter lah!

And make sure she sticks that pacifier in your mouth!