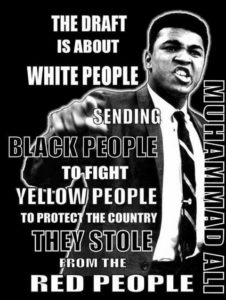 My friend, the Thailand-based American author John Arnone wrote a letter to The Nation, a newspaper in Thailand about Muhammad Ali; needless to say it was heavily censored before being published and John said his letter “should have a few people wanting to tar and feather me, but what’s new?” It’s early days yet, and I haven’t seen the reactions but here’s the unedited, original version of John’s letter:

Was Ali a great boxing champion? Yes, probably the best ever. Was he a great personality and all around fun guy to watch? Absolutely! Should he be remembered and eulogized for those reasons? Of course, it goes without saying. But as a man and an American i have to ask myself a few questions. What made him better than me that he didn’t have to answer the call of his country to the armed forces? It goes with the turf. You enjoy the opportunity that America has to offer and in turn, you answer the call if it comes. And lord knows he definitely more than shared in the fruits of being an American. If you have a special reason for not being on the front lines, then you accept another line of work away from the front, but you serve. To make matters worse, it is fairly obvious that he couldn’t have cared less about the Vietnamese he claimed to be so concerned about because if he did, he would have been out protesting the war before, during and after his trial, like everyone else, But that didn’t happen. Rather, I think he just resented the possibility of having to answer to the white establishment that he so reviled.

Should Ali be remembered for his talent and charm, for being a great father and probably a great friend to those that knew him, not to mention his many charitable works? Of course. Should he be offered the sainthood and labels of a great humanitarian that he has received in the past and is receiving again? I’m sorry, but I can’t buy that. Not only because he refused the draft, but also because he was an integral part of an organization that was blatantly racist. Read any of their old newspapers that they distributed nationally in America and you will find that white people were referred to as “White Devils” as a matter of policy. Not just the Southern whites who did have unfair policies against blacks at the time, but rather, all white Americans.

I particularly resent the deification of Ali because in my opinion he was the prime motivator, if not creator of the black policy of laying as much guilt as possible on white Americans. A policy that stands to this day.

I am not trying to cast a shadow over his memory. I know that his family will miss him, I am simply attempting to appeal to the white people that are singing his praises to take a closer look at his legacy as it applies to White Americans and America in general and to get past the brain washing that we were all subjected to for over fifty years.