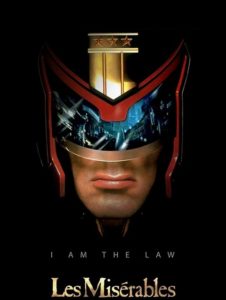 Due to “kao peh kao bu” by some miserable bunch of pricks, the world-famous musical Les Misérables had to cut off a scene involving a brief peck on the lips among two men during the song Beggars at the Feast.

After being told it violated its “General” rating, the producers decided to remove the kiss, Singapore’s Media Development Authority announced.

The show’s organizers said that the scene was intended to be comical.

Obviously some members of the public didn’t think so. They took it to the authorities.

We have a taxi system that’s fucked, a MRT that’s even more fucked, a government of overpaid cronies and incompetent sycophants and a nation plagued with diabetes and obesity, a strawberry generation that is being issued knee and elbow pads for National Service, a vulnerable tiny dot of a country susceptible to terror attacks, a country where the young’s moral compass seems non-existent, a country where during an accident, people prefer to take photos using their cell phones rather than help the victims and we “kao peh kao bu” about a quick same-sex kiss in a musical?

What the fuck is wrong with us? Are we sick or what?

Make no mistake, I’m not a gay activist, nor am I a fighter for LGBT rights; in fact, I think if God intended for us to be gay, He would have created Adam and Steve and not Adam and Eve, but why such a big hoo-ha over this miserable kiss?

Will watching that kiss turn us all gay or what?

And so what if people are gay? I don’t care what your sexual orientation is. I relate to you as another human being deserving of all your rights. And if I choose to collaborate with you, it’s based on your merits, your competency and what you bring to the table, not how you fuck or like to be fucked.

Every time I think of it, anger surges to my cerebral cortex.

Heard of the term “transference”?

It’s mental state whereby feelings and attitudes in a person are attributed to others. Long story short: a lot of those who condemn gays are themselves afraid of their own gay tendencies.

Give that a thought, pricks! Those same miserable pricks who ran crying to the authorities.

And get a life!

And may losers like Omar Mateen, that detritus, that human trash, who carried out the deadliest mass shooting in US history by killing 49 and gunning down 53 others at that gay nightclub in Orlando, burn in hell for all eternity.