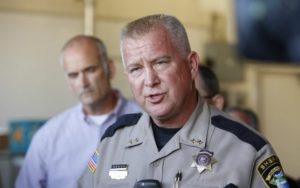 I started a joke which started the whole world crying.

A sheriff’s refusal to name the perpetrator of the mass shooting in Oregon last year seemed to have started a trend. (That’s the doofus in the picture above.) A recent CNN tribute to the victims of Sunday’s shooting in Orlando deliberately avoided mentioning the name of the shooter, Omar Mir Seddique Mateen.

Apparently the idea was to not give eminence to the gunman. “I will not give him the credit he probably sought prior to this horrific act of cowardice. You will never hear me mention his name,” declared the sheriff. Very Churchillian. Impressed the shit out of so many.

Not naming the culprit is an utterly asinine move by the smartest people from the smartest country in the world where an ordinary dude could walk into a store and buy an assault rifle intended for warfare.

I say, shame and name the monster!

Naming the loser will expose his network, allowing his coterie of perhaps like-minded evildoers to become known, thus preventing further tragedies; not only that, it will enable the authorities to ferret out those potential murderers lurking around in sleeper cells, waiting for the right time to strike. By not naming these killers, aren’t you not falling into the trap of the killers and their associates? Hey, I’m all for preventive detention!

More than once, America’s security networks and agencies have failed miserably. This Orlando gunman was in the sights of the authorities – the FBI knew of him, they monitored him for about a year and even interrogated him twice, yet he was given the green light to work for G4S, the world’s largest global security firm, which employs more than 610,000 people in 110 countries.

Those young kids from the Famous Five stories written by Enid Blyton that I used to read when I was a little boy would have fingered the killer out, but what happened in America? What happened to the FBI, the US Department of Homeland Security and all the other government security agencies dedicated to serve and protect?

Must have been sleeping.

I am also reminded of what the ancient Chinese did to hardcore criminals.

If caught, the criminal convicted of committing extremely atrocious crimes may be sentenced to a punishment known as “Eight Horses Separating the Body” – the wrongdoer’s body is tied to eight horses and the horses whipped to gallop off in eight different directions. During the period of the Warring States, Shang Yang, the chief advisor of Qin, was executed this way in full view of the public.

Clearly, the primitive Chinese believed that while God may forgive criminals, they, however, were quite happy to arrange the meeting.

This punishment involved the execution of all relatives of an individual, which were categorized into nine groups. There were also variants of the punishment found in ancient Korea and Vietnam, the most prominent example being the family of Nguyen Trãi, the Vietnamese scholar.

These forms of punishment are extremely cruel and callous beyond imagination and absolutely heartless and inhumane, and completely irrelevant in this day and age or in any particular time in the history of mankind, but so is mercilessly gunning down 49 innocent people in cold blood.

For would-be killers out there, I implore you to please consider using other weapons, because there are no U-turns with guns. You can’t stop a bullet half way. You open fire and it’s a done deal. Real life is not a Bollywood movie where the hero can stop a bullet with his teeth and spit it out.