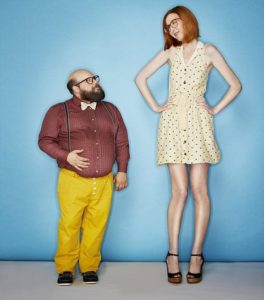 Short people, especially men, tend to overcompensate for their height, or lack thereof, by behaving in obnoxious, attention-seeking manners. They smoke big cigars, brag about the size of their dicks, or boast about their sexual conquests.

This phenomenon is often referred to as The Napoleon Complex because it is thought that Napoleon Bonaparte was a short man, though historians now tell us that Napoleon was actually taller than the average French man of his day, but as he was always seen surrounded by his Imperial Guards who were of above average height, Napoleon always seemed to appear to be a short fellow.

The Napoleon Complex is also a term used to denote those persons who have little or no standing or importance within a social or business group but who strut about falsely exhibiting advanced levels of authority in spite of the lack of real authority. Over-zealous security guards are good examples of that. They are often referred to as “rent-a-cops” or wannabe cops.

I have a good buddy who’s a shorty, but though vertically challenged, he exhibits none of the loathsome characteristics of The Napoleon Complex. When I am with him, I see beyond the physical. As a matter of fact, in my eyes, he is a giant among men – extremely bright, considerate and sensitive, unlike many of those blinking, tantrum-throwing dickless midgets in my life who irritate me to no end. These retards ought to get a life and grow up.