How a Taxi Driver Made My Day 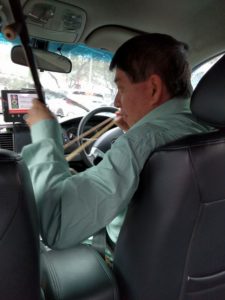 Mr Goh with his erhu.

Last Friday I took a SMRT cab (number SHF 24E, driven by a Mr Goh) from JCube to Ngee Ann City in what turned out to be a most joyous experience.

Mr Goh was playing erhu music on his sound system and commented on the beauty of the music. “Can you visualize the birds flying around – this is what this piece is depicting,” he pointed out and then proceeded to explain the complexity of the piece and how difficult it is to master that tune.

He then played another CD for me and with Mr Goh’s explanation, this time I could almost “see” horses prancing around, going through their various gaits – trotting, cantering and galloping, etc.

What was very cheery about the whole experience was Mr Goh’s very friendly demeanor and his overwhelming and infectious passion for this two-string Chinese fiddle, which is a most difficult musical instrument to play, let alone master.

I learned that he is a sprightly and exuberant 56-year-old who took up the erhu five years ago so that he would have something to do during those long waits for passengers. He saw a man from China playing the erhu somewhere in Woodlands and paid the stranger to teach him. Mr Goh bought his own erhu from an antique shop, and buys cheap CDs (“three for only $10!”)  from Rochor to listen for inspiration. He practices everyday.

Mr Goh is such a refreshing change from the usual cabbies I meet, most of whom are grouchy sourpusses obsessed with criticizing the government. He was also very optimistic and positive, unlike many other drivers who only know how to lament about how bad times are. Mr Goh played a rather challenging piece on his sound system for me to listen and told me to focus on one difficult part and he said “In five years, I shall be able to play something like this.”

What an uplifting experience!

When the cab came to a stop, my day got better because I was further rewarded when Mr Goh took the erhu resting by his side and played a short rendition for me to appreciate.

I left the cab feeling heartened and inspired by this extraordinarily heartwarming experience and wished Mr Goh well.

Mr Goh, may you live long and prosper!