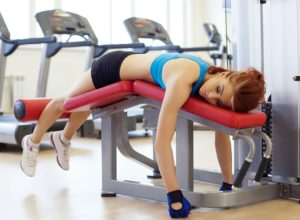 She’s not the only one sleeping.

California Fitness is not so fit after all.

In Hong Kong, employees of California Fitness said they are owed about US$1.3 million in salaries and customers may have pre-paid about US$130 million in fees.

Arrests have been made there.

As in Hong Kong, the abrupt closure of all its gyms in Singapore recently is yet another oft-repeated story of a business biting the dust after collecting advance payment from gullible customers.

The only difference is that here in Singapore, we don’t seem to see any intervention by the authorities or consumer watch dogs.

It’s as if they have been sleeping.

There is no excuse for the lack of preemptive action especially when we have seen more than our fair share of such cases – gyms, spa, yoga studios have sold packages and then suddenly close, leaving customers in dire straits with little chance of recovering their money.

The market has been rife with information about the troubles brewing within California Fitness, yet nothing was done to protect consumers.

Surely the powers that be know that consumers will be baying for blood when California Fitness goes down!

But was anything done to protect consumers?

Singaporeans are suckers for packages.

Now we suffer for that.

(1) Greed – too many of us are enamored with discounts, so when crafty marketers promise to throw in a couple of “free” sessions, we bite. We willingly pay in advance for services not yet rendered. Why? To enjoy the discount. Even when we know that bailing out halfway involves paying a penalty, we sign up merrily. “Got discount mah!”

(2) Marketers exploit our greed and our gullibility. But they themselves aren’t all that smart too. Just because a chain is large doesn’t mean it is being managed by astute business people. Which retard can’t open a large network of stores when there is a huge infusion of funds? Remember many familiar names, big chains that used to dot our landscape – where are they now? There is such a thing called “burn rate” and when your outgo is more than your income, your upkeep will be your downfall eventually. You may have deep pockets but nobody can lose money forever.

Of course, now that the chain has gone kaput, everyone has something to say about it. There is no lack of instant experts. (Yours truly included.)

But one view I came across makes a lot of sense – the opinion of Dr Leng Ho Keat, Assistant Professor of Physical Education and Sports Science at the National Institute of Education. In talking to the media about why chains like California Fitness collapse, he cited the selling of lifetime memberships as a foolhardy move by gyms.

“If you’re selling a lifetime membership to a 20-year-old, he can exercise there for free for the next 60 years of his life,” he said. “So you need to be very prudent and calculate how much it costs to offer such packages.”

When businesses fail to recognize this, they may use up the money thinking it is profit and this could result in cash flow issues in the future, he added.

“So it’s not about not getting enough customers, but not managing their cash flow properly.”

That’s why he’s a professor and I’m just a noise maker.