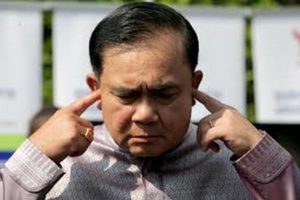 It doesn’t take much to lighten up my mood.

I just have to look at news from neighboring countries – in Malaysia, a big gorilla with a fake British accent is now top dog but his misdemeanors are so transparent it is laughable, in Indonesia, clowns continue to rule the roost but it is Thailand that had me roaring on the floor the other morning.

Two 8-year-old girls have been charged under a draconian Thai junta law for tearing down voter lists for an upcoming referendum, as that Neanderthal Prayut Chan-o-cha goes to increasingly bizarre lengths to muzzle dissent.

The junta led by this mongrel attack dog is determined to see a charter it drafted pass in the August 7th poll and has outlawed critical discussion of the document with a 10-year prison sentence.

Campaigning of any kind is also banned and authorities have already arrested or warned scores of people for handing out critical leaflets or wearing “Vote No” T-shirts.

The 8-year-olds fell foul of the law after confessing this week to tearing down voter lists outside a school in northern Thailand because they liked the paper’s pink color.

Prayut Chan-o-cha is better off as a security guard.

Let me explain – most security guards (wannabe cops) I have encountered are utterly inflexible and stick by the books without exercising what little brain cells they have.

To allow someone with that level of IQ to become prime minister of Thailand is a suicidal move by the Thais.

Sure, rules are there for a reason but dogmatic and blind adherence to rules is sheer stupidity.

Let’s say there is a law forbidding people to work on public holidays but if your child drops into a well, on such a day, does it mean you are not allowed to go rescue him?

Maybe only parents will understand this.

As for the likes of Chan-o-cha, I don’t know.

If those two innocent school girls are his granddaughters would he arrest them?

He looks like the type who would throw his own mother under the bus.

Yeah, sure, lock me up; the lèse-majesté law is for insult to monarchs, not to buffoons.

Singapore ministers should take care not to outdo some of their counterparts in the neighboring countries.

This can be tricky because when you are doing what you are doing, you often can’t tell how ridiculous you really are behaving. This is more so when you harbor the perception that you have the support of the majority or are surrounded by bootlickers whose sole purpose of their existence is to suck up to you.

It often takes bystanders outside the furor to observe what an idiot you have become with your actions and words.