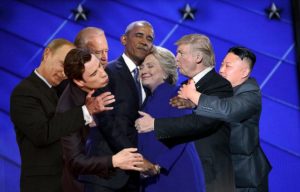 Minions will help the evil with the stabbing.

You can never trust politicians.

In taking up the transport minister’s post, Khaw Boon Wan said “I believe in raising Singaporeans’ quality of life further in a city where public transport is so convenient, accessible and reliable, much like public utilities, and that Singapore can be car-lite.”

Yup, we can all see that’s he’s working hard on it.

All I can say is I may have been born at night, but not last night.

For sure, the minions are now all talking about “car-lite” with hordes of civil servants and transport ministry apple-polishers and ass-kissers promoting the “car-lite” idea with nary a thought given to other vital considerations.

For Pete’s sake, allowing retards to carry bicycles into SMRT trains or allowing cyclists to share footpaths with pedestrians is NOT making Singapore “car-lite.” If that’s a strategy by the overpaid scholars in our midst to make Singapore “car-lite” then sorry, Singaporeans, we’re in for the rough ride indeed. (Pardon the pun.)

And meantime in the greatest country on earth, peopled by the smartest human beings on earth, an election campaign provides much entertainment as well as invaluable lessons.

Bitter rivals in the last election, Obama now says that there is no one better than Hillary to lead America, not himself, not even Bill Clinton and they hugged that hug that looks almost post-coital in nature.

You may say that Obama was being sporting, as sporting as Bernie Sanders now endorsing Hillary, but come on, kids, grow up; it’s all politics, where words mean absolutely nothing.

So the next time somebody says nice things to you please watch out because the same person could be stabbing you in the back the next available moment. Stab you with a big knife, while hiding behind a façade of being a real nice guy. Yes, the smiling tiger. Everyone knows what smiling tigers are all about, that is, unless you’ve been living under a rock.

I know, I was just blindsided.

In the most unlikely of places, I must add.

One day, all will be revealed – yes, and I mean ALL, complete details with full names, rank and serial numbers (as they say in the movies) – in my memoir.

It’s a promise, not a threat.

A smile in front and a knife in the back, I was brutally and mercilessly stabbed. The end result? I was robbed of a mega-million dollar project.

Money stolen is one thing but some nitwits apparently thought that they can gang-bang me and get away with it.

Siddhartha said “I can wait, I can fast and I can think.”

Though for now, I have to mentally overcome the betrayal first.

What I learned propels me onto stuff that truly matters.

Yes, I’ll leave the parasitic fortune-cookie-quoting muttonheads to their asininity and their sloppy games.

They have plummeted to new lows even by their own standards.

They have to know that if they want to take me on, they MUST kill me. There isn’t any quit in me.

Finally may they relish their journey down the road to perdition.

May they have a great afterlife!