I Need Schooling on Feelings 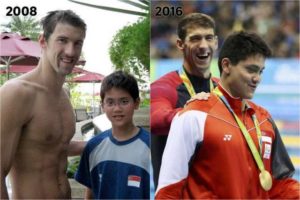 Decades ago, my uncle had a thriving business until an apprentice went down the road and opened a similar business. He even appropriated the company name and added a “xin” prefix to the name. “Xin” means “new” in Chinese. Usurped!

It’s like a waiter at MacDonald’s opening a burger joint down the road and naming it “New MacDonald’s.” What a shameless usurper!

On Saturday, I wondered how US Olympics swimmer Michael Phelps felt when the school boy from Singapore, Joseph Schooling, who used to idol-worship him, beat him to win a gold at Rio eight years later. It was Singapore’s first-ever Olympic gold medal.

How would I feel if I were a masterchef teaching people to cook, and a kitchen help suddenly shows up with a certificate saying he too is now not only a teacher, but a “certified” one, with a piece of paper to prove it?

Indeed how would I feel if I were a kung fu master and a helper would one day show up brandishing a certificate showing me he too is now a martial arts coach?

Michael Phelps, ever the gentlemanly sportsman, had very complimentary and nice things to say to Joseph Schooling.

The media interviews following his epic triumph showed Joseph Schooling to be a very well-bred, humble and gracious sportsman as well, despite his rather annoying accent. (I have lived and worked in the States far longer than he has, and I didn’t pick up any phony accent.)

But I am Lohcifer, I am not Michael Phelps or Joseph Schooling and I am not magnanimous. And I don’t think too highly of people who steal my thunder. So Mr Phelps and Mr Schooling, please school me on how to feel and what to say!