Don’t You Gain a Wife and Lose Everything Else 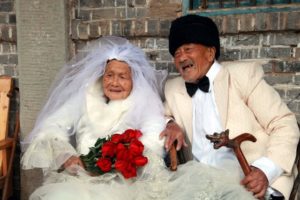 They waited till all their friends have died.

I normally avoid attending Chinese wedding banquets. They are long-drawn affairs and expensive both for the hosts and the guests (because our ang pows cannot be too small – the money inside should at least help the wedding couple pay for the table; if the restaurant charges 1200 bucks per table, then your ang pow should contain at least 120 bucks) and nowadays the food quality just isn’t there anymore, plus the prospect of having a two-hour, ten-course dinner with nine other retarded strangers scare the shit out of me. However, there is such a thing called how to zuo ren and one simply has to do some things one detests. If everyone does whatever he or she likes, then there is no social harmony in society.

Long story short, I attended three weddings recently, three weddings I just couldn’t “escape” from and they followed the usual format of cocktails before they let you into the banquet hall, then the mandatory viewing of a corny video detailing the couple’s childhood (who the fuck cares?!) which also showed how they gloriously lived in sin (meaning, out of wedlock; call me old-fashioned) by going on vacations everywhere together, and just before you drop dead from hunger, the couple would then sashay in amidst some loud stupid music and a cloud of mist emitted by some smoke-emitting gizmo, food is then served (finally!) the couple goes on stage to cut a huge plastic wedding cake (whatever the fuck for?!) and pours champagne into champagne flutes or glasses arranged in a pyramid – a completely meaningless and wasteful gesture as no one gets to drink any of that bubbly – then the couple leaves and returns after a change of clothes (is this a frigging fashion show or what?!) blah, blah, blah, you know the drill…

One wedding banquet I went to was at a top-end hotel at the Marina area and there were 45 tables occupied by lots of friends and relatives, business associates of the wedding couple’s parents, etc. I bet it cost a frigging bomb! It was the Ritz Carlton, no less!

I couldn’t help but wonder how many of those friends at the wedding would still be friends one year later.

I wonder because I have known of a few people who, after acquiring a wife, cut off all ties completely with their friends, even friends they’ve known for decades.

One dude not only stopped all ties with all his friends, he changed his barber, his tailor and even his dentist.

If you have a wife like that, I tell you, you are FUCKED!!!

Don’t ever enter into a marriage where you’ll be pussy-whipped.

Let not your wife dictate who your friends should be. She doesn’t have to like them but she cannot demand that you stop being friends with your friends.

Very soon, she’ll be telling you to kill your mother.