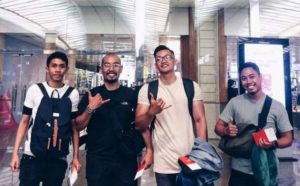 Our heroes from Singapore!

Sometime last week, in Iceland to see the aurora borealis, four Singaporeans saw a car turning turtle and rushed to rescue the woman trapped inside.

While I applaud this brave and heroic act, I wondered why one of the four Singaporeans had to film the rescue and posted it on Facebook.

If the person had not spent time filming the effort – the clip was a minute and 34 seconds long – wouldn’t an extra pair of hands be really helpful in the rescue? An accident with an overturned car is definitely a life-and-death situation and surely a person’s first instinct is to assist, not whipping up a camera to record the event.

I read that a numb-skull somewhere has explained that three persons in a rescue is more than sufficient and filming the episode will – among other uses – serve as a recording in case of lawsuits, and in the case of deaths, allow family members a final glimpse of any casualties.

I have never heard of anything more ridiculous than that.

When you see a fellow human being in distress, you put everything aside and rush to help. You would want that if you are the victim, wouldn’t you, even if you are a numb-skull. And don’t give me that crap about “citizen journalism” – that’s just a fancy term used by resource-strapped newspapers to make use of nosy readers’ pictures and videos.

In this day of the omnipresent smartphone, let’s be mindful of our actions. Not only do we run the risk of intruding into people’s privacy, we can unwittingly become unhelpful and callous bystanders if all we care about is to quickly capture the misfortune of others just so that we can post them on our Facebook pages. As a matter of principle, I refuse to look at pictures of accidents that people send to me via WhatsApp or email. There are a few retards I know who take great delight in sharing with me gory pictures of accident victims, videos of beheadings, etc and I refuse to look at them not because I don’t have the balls to, but because I think the dead deserve some dignity and the busybodies of the world have no business recording such shit.

Some people need to grow up.