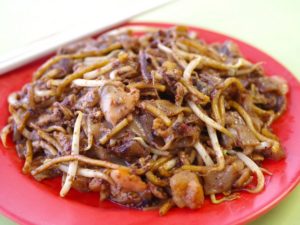 On November 8th I was drawn to the headline “Kick your char kway teow habit” in MIND BODY section of The Straits Times.

It was written by a Lester Wong who mentioned the dish twice without any explanation as to the “harmfulness” of the dish.

Char kway teow is a humble dish of noodles fried with soy sauce, pork oil, egg, a few slices of Chinese sausages, bean sprouts and topped off with some cockles.

Yes, char kway teow may be oily, but it is somewhat of a national dish with its genesis as an energy-giving means of sustenance to impoverished denizens of a then-developing nation. It has carbohydrates, the pork oil and accompanying tiny bits of lard give it flavor and provide energy, the cockles have high protein content, the egg provides nutrients, the bean sprouts provide some Vitamin C and for a finishing touch of simple “luxury” a couple of slices of Chinese sausage are added. Kudos to the genius who “invented” that dish!

For that writer to just mention the dish twice without any reliable clarification as to the “harmfulness” of it puzzles me. Not only that, it insults the intelligence of Singaporeans who have since realized that there are healthy versions of char kway teow fried using vegetable oil and that there are far more “lethal” local dishes than char kway teow. I mean if you think char kway teo is deadly, try laksa! Moreover, no one eats that dish every day; most perceive it as an occasional indulgence, a guilty pleasure if you will. Just as many wealthy people pay top dollars to indulge in the humble Teochew moey or porridge eaten by the coolies of olden days, char kway teow serves to bring us fond memories of those early difficult days of our nationhood.

So please, let’s not demonize and denigrate a dish that has helped build a nation.

What a country! First they came for our smokes, and now they’re after our char away teow!