Those Who Think They Know Best Know Nothing 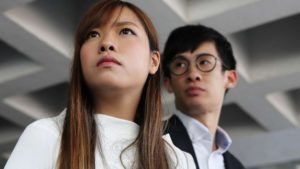 If they were my kids, I would slap them back into their mother’s womb.

Amongst them were Sixtus Baggio Leung and Yau Wai-ching, from a pro-independence party set up after the Umbrella Protests, as well as Nathan Law, Lau Siu-lai and Edward Yiu, who were all active in the protests. (The Umbrella Protests refer to the month-long “Occupy Central” event, during which protestors used umbrellas to shield themselves from pepper spray fired by the police, and yes, if you’re on the lookout for weird names, check out Hong Kong – I once had a Hong Kong secretary named Labia Kan.)

All newly-elected legislators made a mockery of their oath-taking. Some deliberately mispronounced “China” while others intentionally broke up sentences with long pauses. During their oath-taking time, Leung and Yau unfurled a banner that read “Hong Kong is not China” and even mispronounced “People’s Republic of China” as “people’s re-fucking of Chee-na.” I’m still trying to pick my jaw off the floor after seeing such uncivilized behavior from the two young upstarts on TV. Yup, totally grossed out.

Not surprisingly, the Beijing government intervened directly with a legal ruling to disqualify the two legislators, who seemed to think that the Legislative Council is a kindergarten.

Writing this I am reminded of a Kim Philby and what he once said.

Harold Adrian Russell “Kim” Philby was a high-ranking member of British intelligence who worked as a double agent before defecting to the Soviet Union in 1963.

He said “To betray you must first belong.”

I am not claiming that Leung and Yau are treason-committing betrayers of any ilk – though they certainly betrayed the trust of those stupid enough to vote them in – but by behaving in a such a shitty manner resulting in their being denied their rightful places in the legislature, they have kissed goodbye any opportunity of effecting change.

Today they are as good as any Hongkonger, and as powerless and helpless.

Let this be a lesson for those whose behavior – or should I say misbehavior – cause them to become outsiders: those who walk away, those who quit in rage, those who turn their faces against odds and adversities. Unless they possess an iron will to soldier on with an indomitable spirit, and the right attitude, they won’t be able to change a thing. They’ll only end up as a laughing stock. Indeed, how you respond to setbacks shows your true character.

Walking away – or sabotaging yourself resulting in your removal, as in the case of the two retards in Hong Kong, Leung and Yau – achieves nothing.

Being outside, no one can change what’s inside.