The Ultimate “Fuck You!” 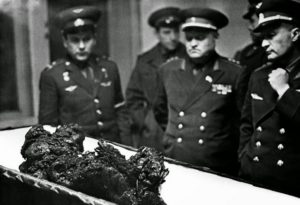 All that was left of a hero.

Back in 1967, to commemorate the 50th anniversary of the founding of the Soviet Union, Leonid Brezhnev demanded something spectacular from the Soviet space program. He wanted to stage a dramatic midspace rendezvous between two Soviet spaceships. The plan was for two Soviet Space vehicles to launch into space and perform a dramatic orbital docking that would allow cosmonauts to move between ships. The first capsule to be launched would be the Soyuz 1, with cosmonaunt Vladimir Komarov piloting. A second vehicle – Soyuz 2 – would take off, with two additional cosmonauts; the two vehicles would meet, dock, Komarov would crawl from one vehicle to the other, exchanging places with a colleague, and come home in the second ship. Brezhnev made it very clear he wanted this to happen.

Komarov was selected to command the Soyuz 1, with Yuri Gagarin, the first human to journey into outer space – as his backup cosmonaut. Both knew the space capsule was not safe to fly, but everyone in space program was terrified of Brezhnev’s reaction to the mission being delayed or scrubbed. Komarov told friends he knew he would probably die. But he wouldn’t back out because he didn’t want Gagarin to die.

Gagarin suggested that the mission should be postponed. But who would have the balls to tell Brezhnev? Gagarin wrote a 10-page memo and gave it to his best friend in the KGB, Venyamin Russayev, but nobody dared send it up the chain of command.

As the launch date drew near, everyone was more and more pessmistic. There were serious problems – pre-tests flights had been disconcerting, the technicians who had inspected the Soyuz 1 had found 203 structural problems. Gagarin showed up to the launch in full gear and tried to convince the crew to let him pilot the craft instead, but the crew, including Komarov, refused to let him.

In space, problems started at once followed by other glitches as the flight went on. Seeing all these problems, ground control decided to abandon the Soyuz 2 launch and bring Komarov home.

After many excruciating moments of struggling and overcoming technical malfunctions, Komarov successfully re-entered the earth’s atmosphere but as the cabin descended through the atmosphere, the drogue parachute came out but the main parachute remained stubbornly in its container. When the reserve chute was popped out, it tangled in the lane of the drag chute of the main parachute. Soyuz 1 crashed at great speed into the steppe at Orenberg at 7 am, killing Komarov. The cabin exploded on impact and when Soviet Air Force recovery teams arrived all they found was burning metal, the rim of the top of Soyuz being the only hardware they could identify.

As Komarov was headed to his doom, US listening posts in Turkey heard him crying in rage, “cursing the people who had put him inside a botched spaceship”. He told ground control officials he knew he was about to die. The Soviet premier Alexei Kosygin called on a video phone to tell him he was a hero. Komarov’s wife was also on the call to talk about what to say to their children. Kosygin was crying. When the capsule began its fatal descent the American intelligence “picked up [Komarov’s] cries of rage as he plunged to his death.” Some translators heard him say, “Heat is rising in the capsule.” He also used the word “killed” — presumably to describe what the engineers had done to him.

Komarov was honored with a state funeral in Moscow, and his ashes were interred in the Kremlin Wall Necropolis at Red Square.

But why an open casket service? Komarov demanded it personally because he wanted to send a message to the government officials who had caused his death. He knew the capsule was unsafe and that he would very likely die, he knew he would not be returning alive so he made the demand before launching. His final “revenge” was forcing his superiors to look at what they had done.