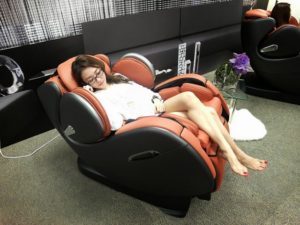 Once they got your money, most companies regard you as some sucker who is no longer of value to them.

OSIM is one such company.

A couple of years back I was given a massage chair that – I was told – cost nearly S$8000/-, and lately I’ve been wanting to replace the headrest which is beginning to look kinda worn out, so I went to their website which says just bring whatever you need replaced to any of their stores and they will send it to be fixed. The only caveat is that you would have to go to their head office to collect the replacement.  (This in and of itself is a bit stupid, do they expect people to haul an entire massage chair that weighs a ton to one of their stores?)

I visited an OSIM store at JEM with the headrest but the lady in the store was completely befuddled by the whole idea. “You sure ah? Like that one meh?” she asked and then walked away.

So, when I got home, I emailed OSIM to get a definite answer.

That was January 13th. The auto-reply said they will respond within five working days.

I emailed them again on January 24th – and yes, no prize for guessing it right – nothing happened again.

I then phoned them.

Waited half an hour listening to elevator muzak and then a recording said “You are in queue number two.”

15 minutes later “You are in queue number one.”

Then, five minutes later, “You have exceeded the length of waiting time, good bye” (or words to that effect) and the line was cut off.

I should have known.

I must have forgotten that OSIM was started by some Ah Beng who got his beginnings by selling cheap electronic crap at People’s Park.

So expecting a modicum of decent customer service was I guess a bit much, huh?

I guess once Mr Ah Beng got the eight thousand bucks for the chair, I’ve outlived my usefulness as far as he’s concerned.