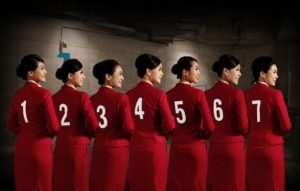 Pick a number, any number, and see her disappear.

Except for one or two flights, I’ve flown business class since I was a teenager and flying economy has always been a problem for me. Recently airlines were aggressively touting Premium Economy seats and giving the impression that they are somewhat similar to their business class seats. What a crock of crap. I should have known but I was determined to give it a try.

I flew from Singapore to Hong Kong on January 19th and returned on 24th on Cathay Pacific’s Premium Economy.

Was it worth it?

Cathay’s website hypes it up convincingly, their copywriter must have gone nuts and got carried away. Certain perks mentioned were simply lies. They don’t exist.

In the cabin, the seating configuration was 2, 4, 2. Space between passengers appears to be larger than in economy class but seats are only a little bigger. No problem with the legroom – I’ve always managed to survived squeezy legroom despite being over 6-foot tall but I do covet the larger space between passengers – I once flew on a conducted tour to Israel on economy and the tightness in the space between passengers made me feel really claustrophobic. The space was so tight I couldn’t even read a newspaper without elbowing the next passenger’s eyes.

Not only are the seats in Cathay’s Premium Economy just a little bit bigger than regular economy seats, they were hard, uncomfortable seats with limited recline space.

The discomfort is made worse by the horrendous inflight service. I have flown Cathay on first and business class before and the impression I had then was that the crew would rush through a meal service and never appear again. It was the same this time, only worse.

You might be a Premium Economy passenger but you are basically an economy class passenger – one indication is that there is no dedicated toilet for you front of the plane, you trek all the way back to use the same toilets as other economy passengers.

On the flight to Hong Kong, breakfast was served; cabin crew offered juice and if you wanted coffee you had to ask for it at the same time, because they don’t come back and offer you coffee later.

Food was the same food served to regular economy passengers.

From Hong Kong to Singapore, dinner was served but when I asked for coffee but the cabin attendant snapped “We are not serving coffee at this time” but she never returned with coffee or tea.

Half an hour later a cabin attendant ran around dumping tiny tubs of ice cream on passengers’ trays while screaming “Ice cream, one flavor only.” It may have been Häagen-Dazs but it was frozen rock solid and impossible to eat.

Soon, the trays were cleared and the cabin crew disappeared for the rest of the flight.

The temperature in the cabin was too warm, people were perspiring and passengers were fanning themselves.

So is Premium Economy worth it?

You decide for yourself.

This is confirmed by the fact that on Cathay’s website, there is simply NO place to provide feedback. Access to Cathay Pacific seems impossible; all email addresses are hidden.

After this experience, I told myself, if I am unable to fly regular business class, I am not flying. Period. I rather forgo a trip than subject myself to being treated like cattle.

Don’t believe a word by bloggers crowing about how great Premium Economy is – most of these scumbags have been incentivized to write such crap.

Me? I actually paid good money and flew it.