Should I Apologzie To Those Who Do Me Harm? 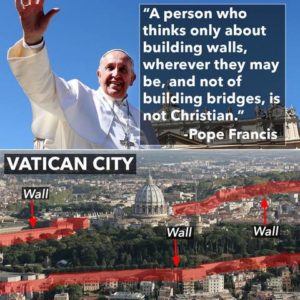 Intruders with ill intentions can come into your territory, take advantage of all the benefits there are to be reaped, give nothing back, and on occasions, even wreck damaging havoc and cause deaths with their ideology and militarism. So, you protect yourself. We Chinese do know a bit about walls, you know. Of course, we didn’t ask those interlopers to pay for the wall – that’s stupid, impractical and plain impossible to execute. I agree with my friend Phil on that. Phil is one of the brightest men I know and his perspectives are razor sharp. He gets things.

Well, what’s wrong with wanting to protect your own country? What’s wrong with keeping the undesirables out? Aunty Angela thinks there’s nothing wrong; well, look at Germany now.

If there are genuine talents from foreign lands that can be of help to us, we’ll of course let them in, but not before stringent background checks have verified that they are men and women of character, with skills not available in our own country.

This is what we as a country has been doing for umpteen years.

Far away in the west, the president of what is considered a great country is doing precisely what many other countries are doing – protecting his country’s borders, and hence protecting his people, but he came under severe attack by lots of people from his own country. Even the judges in his country rebelled against him. Spurned their president, they did.

The press seems to lead the lynch mob, one retarded journalist named Nicolas Kristoff, even wrote a piece of utter crap in The New York Times on February 2nd apologizing – on behalf of his president – to a group of people who had brought much destructive annihilation and death to the innocent people of his country and to the innocent people of other countries. Think 911, think Boston Marathon, think Paris, November 2015, think Nice, July 2016, think Berlin, December 2016. Has Kristoff completely forgotten those mauled down mercilessly and had their lives snuffed out?

Well, I supposed if you are as fucked up as the American press (look at their dismal and laughable “prediction” and “forecast” about who would win the 2016 presidential election), you would indeed need to do all kinda shit to regain some face. This is called “grasping at straws.”

So, it’s time for clowns like Kristoff and his kind to take off their gloves and start whacking, just to prove that they are not taking up space and using up other people’s oxygen; “diversity” and “acceptance” provide the excuses needed.

I wonder if Kristoff would still embrace some of those barbaric monsters he apologized to if one of them should kidnap one of his relatives or if one of these murdering pricks beheads one of Kristoff’s loved ones. “You love your daughter, don’t you, Mr Kristoff? Okay, let me slice her head off with this serrated knife.”

Ah, Krisfoff. I shake my head, reading that rubbish he wrote. His ass must be jealous of the amount of shit that comes out of his mouth. Pulitzer Prize winner indeed. Not once, but twice. And he writes shit?

Kristoff’s gene pool could use a little chlorine, to be honest.

Maybe he has a death wish.

I’m sure those killers he apologized to would be more than willing to help him out.