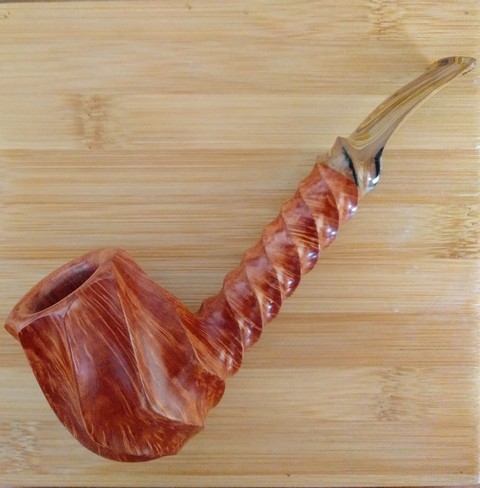 A Von Erck pipe commissioned for my 60th birthday.

Handcrafted, one at a time in Negaunee, Michigan, the very exceptional pipes of Lee von Erck have been demanding attention throughout the pipe smoking community worldwide.

Pipe smoking aficionados claim that von Erck’s pipes are well sought after due to their unique design, meticulous craftsmanship, and great smokeability.

von Erck himself believes that his pipes are appealing because he himself has been smoking pipes for more than 50 years and he personally knows what appeals to the demanding pipe smoker. When he carves a pipe, he strives for one that is eye-catching, expresses the natural grain in the briar, feels good in the hand, and above all, smokes well.

Each von Erck pipe created is a one-of-a-kind piece, having being developed based on the character of the briar itself. The personality of each particular piece of briar is what dictates to von Erck, the consumate craftsman, how each piece will develop, and become that one-of-a-kind pipe.

Boring, shaping, and polishing of the pipes is done in a small workshop in the Northwoods of Michigan. The pipes are then put through a lengthy proprietary oil-curing and drying process before they are returned for crafting of their mouthpieces. Each mouthpiece is as unique and individual as that of the pipe it is created for. The final step in the lengthy process is to assign and stamp each pipe with its own individual serial number and nomenclature.

I have been privileged to have met von Erck several times and am impressed by his dry wit, his sense of humor, his dedication to the craft, and above all, his humility.

von Erck pipes are found in the collections of many prominent collectors and are prized for their uniqueness.

I am honored to be presented with one on my 60th birthday.