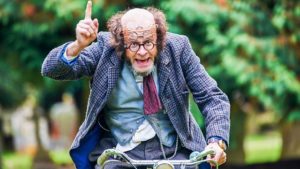 Kishore Mahbubani’s thinly-disguised plug for his latest book has some noteworthy points. (It was an op-ed piece entitled How the Western media gets the Korean crisis wrong published in The Straits Times on May 13th. Google for it.)

However, I can’t help thinking that the ex-career diplomat’s piece is also an unwarranted broadside against Singaporeans. For someone who once wrote Can Asians Think? he infantilized his readers by implying that Singaporeans are cerebrally-challenged. His lecturing tone was condescending and irritating. Just look at some of his phrasings. For example: “Let me ask my fellow Singaporeans a simple question…” and “Let me conclude with a simple piece of advice to my fellow Singaporeans.” I find his choice of words annoying at best. That style is best used for dealing with some non-Asians, especially American deplorables who have very short attention spans and not too many grey cells to rub together. Ironic then that he used the same style of the very media he was warning against.

Well, my dear Professor Mahbubani, let me just say this in as simple a manner as possible: no matter how useful your tips are for the rest of us, patronizing and belittling-sounding exhortations are repulsive and insulting and can result in them not heeded.

If more old-school highbrow haughty pompous asses and self-proclaimed luminaries hiding behind the shadow of the late Lee Kuan Yew think and behave like Mahbubani did and get their way, and continue to talk down to the masses, we will recede back into a nanny state which we have all started to slowly crawl out from. Singaporeans shouldn’t be told want to think.  We have enough of arrogant individuals in our country who are self-congratulatory, unrepresentative, unresponsive and complacent – members of the vulgar elitism; the self-serving establishment that Prof Kenneth Paul Tan – who works in the same school as Mahbubani –  wrote about.

We have survived a tumultuous past and we have been discerning and smart enough to know our way. We have transitioned from Third to First World, not because we are idiots; complex, difficult questions do not stymie us, so a little respect is in order, my dear Professor.

Not only that, the prof is actually wrong; if you read the papers, and use the Internet intelligently, you will notice that more Western media than Mahbubani probably realizes are of the same view that he seems to claim sole ownership of; so what’s he crowing about? Where’s the original thinking expected of no less an achiever than a professor?

By the way, Ambassador-at-Large Bilahari Kausikan is emerging as a very thoughtful though at times forceful writer. He’s a bit of a busy-body and a know-it-all as well as quite a loudmouth but he could be trumping (sorry) the prof, hence, the latter’s perceived need to be more forthright. Professional survival instead of professional advancement – sounds like North Korea, no?