How to Age Cigars 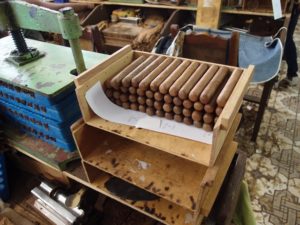 Took this picture when I was in Cuba; freshly-rolled cigars!

Do cigars get better if you age them?

Is the Dalai Lama Buddhist?

All cigars are smokeable.

But freshly-rolled cigars tend to smoke better if laid aside for about a year.

Some continue to become nicer even after many years of being stored. (Under the right conditions of course.)

Someone told me that only Cuban cigars should be aged, not the non-Cuban ones.

My reply is that unfortunately stupidity is not lethal.

All cigars, Cuban or non-Cuban can be aged.

That being said, how should cigars be aged?

An acquaintance whom I shall name “Mr Schizo” once asked if deep-freezing them or storing them in the refrigerator will do the trick. Sigh, some idiots will swallow any bullshit fed to them, hook, line and sinker. Then they behave like know-it-alls and spread the wrong info to everyone.

When I heard the question about refrigerating cigars,  I said to myself “Indeed, the reason why this retard is still alive is because stupidity is not lethal.” Stupidity doesn’t make people keel over and die instantaneously. How unfortunate.

First, let’s be clear about something, and that is: You’ve got to start with a good cigar to begin with.

You cannot expect to pay five cents for a shitty cigar, throw it in Kim Kardashian’s underwear drawer for five years, and expect it to smoke like a Partagas Lusitania five years later.

Aging does not transform a bad cigar into a good cigar. As with humans, a moron remains a moron whether he or she is 20 or 50.

The keys to aging are: