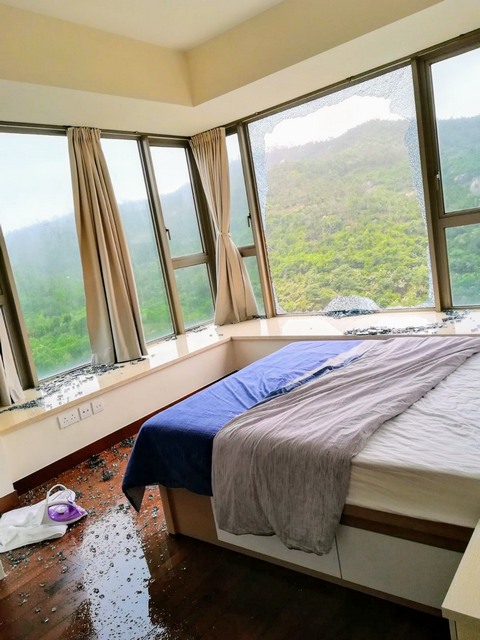 During a WhatsApp chat:

Commiserating with a friend in Macau who just had her bedroom window blown to bits by typhoon No. 10 that hit Macau on August 23rd. The No. 10 signal has only been hoisted 14 other times since 1946. The typhoon – the strongest storm to hit Macau in 53 years – was packing maximum sustained winds of up to 80 miles per hour. Death toll: according to one report, at least 16 that day, and many were reported missing.

Friend: I was in the living room when the glass in the bedroom broke with a bang. I closed the bedroom door and was hanging onto it outside the bedroom. Did not want the door to be blown open and damage the rest of the apartment.

But it was real scary.

I ran in quickly about 3 times to grab my pillows and some stuff on the bedside table. Forgot to wear slippers first and stepped on the glass under my feet. Got cut and bled. In the meantime, the wind was howling, the heavy rain was pelting the apartment and it was total mayhem.

So I stood hanging onto the door as the wind whipped in and out of the room on the other side of the door. I pressed myself against the door and didn’t let go until the end of the storm about 4 hours or so later. Then I sat down to pick the splinters of glass off my feet and cleared out the bedroom.

I managed to get a cleaner to help sweep the glass away but there were glass shards and splinters everywhere in the room. Hope the landlord can get the glass replaced ASAP; also worried about the rain and damp in the room…

Bed linens will have to be trashed because of the broken pieces of glass on them. Managed to drag the duvet, mattress protector and mattress out of the room so that I will have something to sleep on tonight.

Almost everyone in the chat group immediately expressed concern and offered her words of comfort, then in the midst of all that:

A member: Anyone meeting for cigars tonight?

Another member (who was vacationing somewhere in Europe and posted a picture of a steak): Great steak, nearly two inches thick, got a great bottle of wine to go with it too. Nice light lunch.