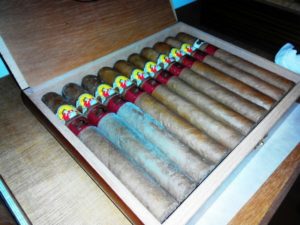 My box of La Gloria Cubana Inmensos in full bloom.

Without realizing it is plume, also called “bloom,” a cigar merchant dusted them off my box of vintage La Gloria Cubana Inmensos I had kept at his store. He thought my cigars had turned moldy.

I don’t blame him. Many people shrieked at the sight of plume, thinking that it is mold and dump the affected cigars into the trash can.

If a cigar merchant can’t distinguish between plume and mold, what more ordinary mortals.

Plume appears as a white or off-white and sometimes, even grayish dust on the surface and may have a bit of a sparkle and seemingly luminescent glow. This occurs when the oils within a cigar come to the surface and crystallize. Unlike mold, plume is never green in color and tends to cover the entire body of the cigar. Mold usually appear as spots and sometimes round little circles embedded in each stick.

Some of my more enlightened friends, when they see cigars with plume at a cigar store, they will purchase the entire box without a moment’s hesitation.

I once got a few boxes free – was in a cigar lounge when the manager was about to throw them all away when he spotted plume and thought that it was mold. I attempted to argue with him that those were plume, not mold, but he insisted he knew better and was going to throw the boxes of rather well-aged Hoyo de Monterrey Double Coronas away. I told him if he really wanted to dump them, he might as well give them to me. He did, and even thanked me for helping him dispose of them. As a matter of fact, he even gave me two sticks of Cohiba Lanceros as an expression of his gratitude. It was my lucky day. Since then, it has been my daily prayer that super-smart people like him shows up every day in my life. (However, God seems to be hard of hearing.)

Anyway, if your cigars show a covering of crystalline powder, just brush off the powdery residue before smoking them. If they are moldy don’t trash them, give them as Christmas presents to the assholes in your life.