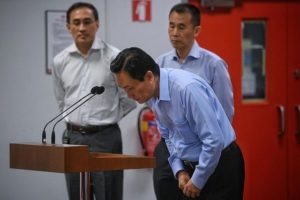 When a convicted (and crippled) terrorist escaped from a high-security prison, the public called for the head of the then Minister of Home Affairs to roll, but our prime minister came out to say something that we do not have such a culture. Yup, we’re not like the Japs, you know. We don’t bow and apologize and commit hara-kiri.

So, since we do not have a culture of public officials bowing in apology for their organization’s failings, it is therefore refreshing to see the SMRT chairman Seah Moon Ming, doing just that last week.

Seah’s desire to bear final accountability is laudable but most chairpersons of organizations do not run them. In the case of SMRT, it is its group chief executive Desmond Kuek who is responsible for day-to-day operations. Shouldn’t Kuek and Lee Ling Wee, (SMRT Trains CEO) be the ones to bow and apologize?

In any case, while apologies and bows are well and good, ultimately actions speak louder than words. The Transport Minister Khaw – who has a lot to say about all kinds of crap each time he runs a ministry – has said that flooding in the MRT tunnel in preventable; in that case, why weren’t steps taken prevent that in the first place? Instead, (may I put it you, Mr Minister) those at the driver’s wheel (no pun intended) including yourself, were asleep and derelict in their duties and now underlings who merely followed instructions from the top became the fall guys and have to suffer bonus cuts.

SMRT should move beyond cheap rhetorics into solid and actionable and measurable solutions. To start off, those running it at the top must have the requisite experience and skill sets. You can’t pluck any favored son and give him a job and say “Go run the MRT.” This is not your father’s company ok.

When I visited Russia I was impressed by its metro. The lavish Moscow metro system was built way back in 1935 while Stalin was in power. Today it is 339.1 km long and consists of 12 lines servicing 203 stations and transports about 10 million passengers daily.

Trains run more speedily than those we have here, there is free Wi-Fi, carriages are longer and frequency faster (minimal interval between trains is 90 seconds). The head of the Moscow Metro is Dmitry Pegov, who graduated as an electrical engineer, but did an MBA, and earned a law degree as well. He started his career as an assistant engineer of electric locomotive depot, then worked as a train driver and even became a driving instructor of locomotive crews, and was eventually promoted to head of the railcar depot Saint Petersburg-Moscow October railway and several other senior positions before being appointed to his present job in 2014.

I suspect if Russia had appointed a retired (paper) general with zero relevant experience and qualifications to run its metro, just so that retired generals will have a place to go to, it would be a different story.