What the British Left Behind 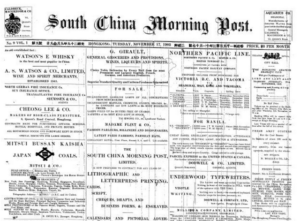 Then they are those who say the Brits left behind their language, well, look at Hong Kong where the Brits have been there lording over the Chinese since God knows when yet till today, I cannot find a Hong Kong Chinese who can speak decent English.

And The South China Morning Post, founded way back in 1903, is a bloody disgrace.

Just read this on The South China Morning Post:

As dusk fell on Sunday, his son and heir 65-year-old King Maha Vajiralongkorn and his sister, Princess Maha Chakri Sirindhorn, carried a pair of golden urns containing their father’s relics from the Grand Palace to two Bangkok temples where they will be housed in a cream-coloured Rolls-Royce.”

So the pair of golden urns containing the late Thai king’s relics will be housed in a cream-colored Rolls-Royce?

That’s what the Brits left in Hong Kong – a level of English which makes such great fun to read. Indeed, great entertainment to go with morning coffee.

And the standard of English is gonna get worse because The South China Morning Post is now controlled from China.