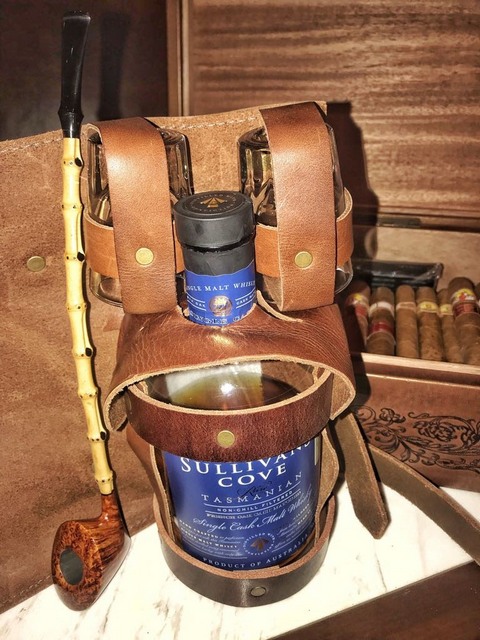 In a leather case, the prized bottle, next to my Smio Satou pipe.

Tucked in a corner in faraway Hobart, Tasmania, Australia, is Sullivans Cove Distillery.

Its French Oak Single Cask Tasmanian single-malt whisky has become a legend in its own right, one of the most sought-after whiskies in the world, and the bottle that put the Australian whisky industry on the map after winning World’s Best Single Malt at the World Whisky Awards in 2014.

If you have a bottle somewhere, you might want to check and see if it’s from barrel 525.

Aged in 300-liter French Oak ex-tawny barrels, this whisky has rich flavors of Christmas spice, chocolate, dried fruit and powerful oak. As a single cask bottling, each tiny batch is different, expressing the unique characteristics of each barrel.

Naturally I bought a bottle when my buddy Ian Baxter (who’s happily retired in Tasmania) took me there, but alas it wasn’t from barrel 525. Those are long gone.

But it was worth every bit of it.

I consider it so precious that I bought a leather case – it comes with two glasses – to protect it.