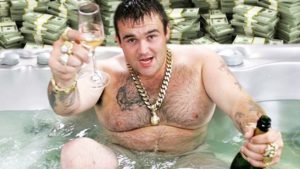 Thanks dad for dying.

I don’t believe in paying for years into an endowment insurance plan only to benefit your descendants after you have died.

Nobody should sit around all day waiting for their parents to croak so that they can inherit.

Everyone should find a source of income to sustain himself and if he can find some job satisfaction while doing it, then good for him.

There are many people chained to boring jobs and I’m not saying you too must do that, but idling around, doing nothing and expecting cash to drop from the sky, that’s not very realistic, is it?

Generally, I don’t think much of insurance policies though I think those that cover accidents, and hospitalization can be helpful in times of need.

And if you have policies which allow you to take out cash for emergencies, those can be useful too.

But to pay big premium amounts year in and year out until you die, so that those freeloaders in your life (who won’t lift a finger to help themselves), will end up with a shitload of cash after you are dead and gone – that is stupidity on your part.

A watch advert says you don’t buy that watch, but you look after it for the next generation.

Why the fuck should I?

Indeed, why the fuck should I worry about the well-being of the next generation when these rude, disrespectful, self-absorbed narcissists won’t even give me the time of day now.