He Who Laughs Last, Laughs Best 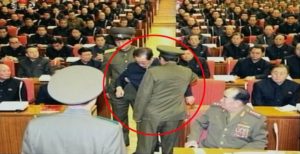 Kim Jong-Un’s uncle Jang Song-Thaek, being dragged away from a meeting of the Political Bureau of the Central Committee of the Workers’ Party in Pyongyang. He was later executed with an anti-aircraft gun.

Just as Trump-bashing is the latest in thing, Kim-bashing is a favorite hobby of many today. On October 29th The Straits Times ran a couple of pages written by Rahul Pathak and Desmond Foo, showing off photographs of North Korea and the tone accompanying the pictures was one of mockery and sarcasm.

“…people stand perfectly still for fear of falling…” – they wrote of North Koreans on an escalator to the metro. I have been to North Korea, and I have rode on its metro, and no sir, people on the escalators had no fear of falling. I bet those who ran the metro do fear for their lives should the metro fails, a reasonable fear that is utterly absent here. Don’t believe me? Well, the clowns who run our SMRT still walk around wearing a smug expression on their shitfaces.

First, a bit of historical background on North Korea is in order.

Japan seized the Korean peninsula in 1910, and the country spent the next 35 years under Japanese military rule. With Japan’s defeat in World War II, US troops landed in the southern part of the peninsula, while Soviet forces secured the area north of the 38th parallel. In 1948, Kim Il-Sung (Kim Jong-Un’s grandfather) was installed by Stalin as the leader of the newly established DPRK – Democratic People’s Republic of Korea. Meanwhile, championed by the US, the United Nations “inaugurated” ROC – the Republic of Korea, in the south.

Long story short: North Korea was created by the USSR and the USA.

Tensions between the two Koreas and their powerful allies erupted into war in 1950, when Soviet-backed North Korean troops invaded the South. Fighting in the Korean War (with China and the USSR supporting the North and America supporting the south) cost at least 2.5 million lives and ended in July 1953, with the peninsula still divided into two hostile states.

The USSR’s collapse in the early 1990s left China as North Korea’s most important and only ally. What choice has the country got other than to desperately fend for itself?

Net net: North Korea believes that going nuclear is the only way to ensure its’ survival.

Kim Jong-Un cannot be blind to the existence of about 600,000 well-equipped South Korean fighting men and women and 25,000 American troops, all combat ready, just 60km south of his border – and, more ominously, hawkish politicians in Seoul, Tokyo and Washington itching to effect a regime change in North Korea.

Kim has only to look at what the US did to Saddam Hussein in Iraq and Muammar Gaddafi of Libya, under the pretext of preventing them from acquiring weapons of mass destruction, and what it is trying to do to Bashar al-Assad in Syria today.

Sanctions? The North Koreans will tough it out. They remember what Mao Zedong said – that the Chinese people must have the atomic bomb even if that meant they had no pants to wear.

Instead of understanding why the North Koreans behave the way they behave, the world instead mocks them, ridicules them, makes satirical movies about them, creates insulting Internet memes about them and consider them pariahs in the international community. Yes, even I myself once called Kim “retarded.” (But then, I use that label on just about anybody.) But please note that I am NOT a fan of chubby and I am NOT defending him.

I am a nobody, I’m just a big mouth and have no solutions to the North Korean issue, but those who mock Kim do so at their own peril. Kim is not stupid, I mean, the guy studied in Switzerland, and today, at age 33, one of the youngest leaders of a country, he is in firm control of his hermit kingdom. (Sebastain Kurz of Australia is younger by two years.) He is also extremely ruthless and exhibited no hesitation killing his own uncle and half-brother. So please don’t treat him like he’s a brainless clown because he clearly is not.

One country to watch out for is Japan – Japan is using North Korea as an excuse to expand militarily. Mark my words, we ain’t seen nothing of Japanese expansionist ambitions yet. Unlike Germany, Japan has never apologized for World War II.

“We will strengthen Japanese defense power, including missile defense capabilities, in order to protect the people’s lives and peace,” Japanese prime minister Shinzo Abe said last week. Abe and evil Japs like him say the current Japanese constitution is a humiliating relic imposed by US occupiers after Japan’s defeat in World War II. Abe wants to change the wording of the document to affirm Japan’s right to have a full-fledged military.

Japan is even taking advantage of natural calamities worldwide as excuses to beef up its army and to venture overseas. As my grandfather used to say “When you stumble upon a Jap and a cobra in the jungle, kill the Jap first.” He ought to know, he and my dad were almost slaughtered by the Japanese when they conquered Singapore.

If the West and the rest of the noise-making world – including tiny Singapore – adopt a much less hostile stance towards North Korea, one can reasonably conclude that the peace of the Korean peninsula is all but assured. Nobody wants a war. What the world needs to worry about is Japan. North Korea provides a convenient excuse for Japan. (By the way, I have been cautioned that the word “Japs” is derogatory. Yeah, like I care two fucks about insulting this nation of buck-tooth, bow-legged yellow perverts.)

In this day and age, nobody knows who’ll laugh last, but it won’t be the idiots making fun of Kim, that’s for sure. And that includes those jokers behind The Straits Times.