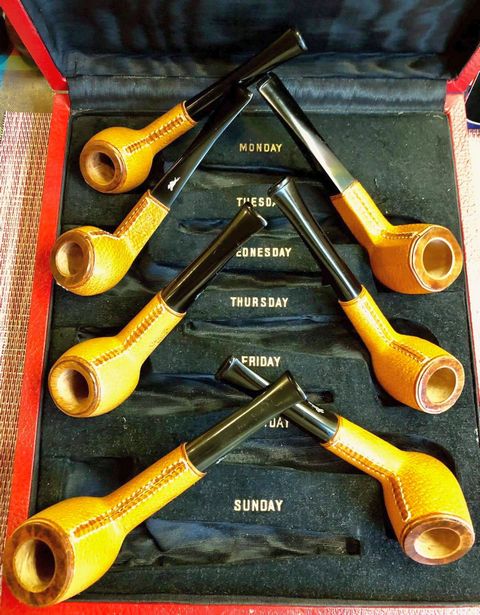 In 1948, Jean Cassegrain inherited a small shop selling pens and smoking accessories near the French Theater on the Boulevard Poissonnière in Paris.

Cassegrain found some poor-quality pipes in the inventory and so he took some of these pipes to a leather worker who clad them in leather.

The rest they say, is history.

Since the name Cassegrain was already registered as a trade name by one of his relatives, Cassegrain, a big fan of horse races, named his newly acquired firm after his favorite race course Longchamp in Bois de Boulogne, near Paris. Hence an outlined galloping race horse with jockey was chosen as logo.

Cassegrain expanded his range to cover pipes clad in pony fur, suede and even alligator skins.

All his pipes were very much coveted and collectors worldwide sought them out. Even Elvis was a fan.

But gradually, the Cassegrain family all but abandoned pipe-making, to the disappointment of pipe collectors everywhere, and has been focusing on leather products like handbags.

Since the last Longchamp pipe was sold in 1978, other pipe makers, like Savinelli, have copied the concept and have been making leather-clad pipes, but the original is still Longchamp.

Picture above shows a seven-day set that came into my possession recently.

WARNING: The asshole who sold this set, hiding behind the name “Sergey Sonolov” is a scammer. Make sure he doesn’t rip you off. You have been warned. He probably doesn’t know that Chinese kids study Sun Tzu’s Art of War since we can talk.