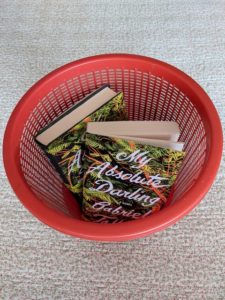 Not worth the papers they are printed on.

I just dumped My Absolute Darling, literally trashed it into the bin. I gave up reading after a couple hundred pages despite universal critical acclamation – “must-read book of the year” and all that crap, accolades probably planted by the publishing company and its paid shills (incentivized reviewers). First off, a story of a nut-case of a gun-obsessed father sexually and physically abusing his 14-year-old daughter is not a subject matter I am fascinated with. Of course, fans will say this story is more about the daughter’s growing independence etc. To me it is a crock of disgusting crap that should have never seen the light of day. That’s saying a lot for someone who has read some of the best books of the world in several languages and who is the owner of several hundred thousand books, including some rare, limited first-editions.

When I buy books, I usually buy two copies – a hardcover for my library and a paperback to read and pass around.

Both have been thrown into my trash bin, or as they say, in England, more accurately, my wastepaper basket.

Yes, some publishers tend to churn out crap, and these scumbags, like the local firm Graham Brash, who have nothing but money – instead of readers’ interests and edification – in their minds, would eventually go the way of the dinosaurs.

I have been trying to purchase a book from Graham Brash but repeated phone calls and emails have gone unanswered.

Maybe one copy is not good enough money for them to be bothered?

Maybe they have gone fart?