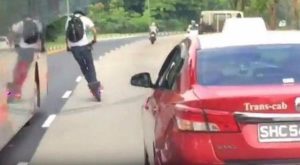 A grown man riding an e-scooter – besides looking fucking ridiculous, this retard must be harboring a death wish, overtaking a bus in heavy traffic.

Electronic bicycles, e-scooters and personal mobility devices kill, get it?!

About 110 such accidents took place between January and September last year, involving 90 injuries and four deaths.

Of these accidents, about 30 were on public paths involving pedestrians and PMD users.

The rest took place at public road junctions when PMD riders were crossing the road, and on roads when they were illegally riding parallel to vehicle traffic.

And on January 8th the press reported that every week, about three accidents involving users of PMDs occur on public roads and paths. Three a week!!!

This despite Land Transport Authority issuing more than 1,700 advisories to cyclists and PMD users for unsafe riding behavior last year. What’s the use of issuing advisories when LTA doesn’t have the balls to send enforcement officers to yank these killer machines off our public thoroughfares? LTA is a joke so far – just look at issues related to our MRT.

Blood is on the hands of those idiots sitting on the Active Mobility Advisory Panel who recommended that PMD riders share footpaths with pedestrians. I bet none of those elitist clowns on the Panel walk on footpaths.

As a nation, Singapore should re-think the use of such devices. And don’t get me started on electric chargers for these devices catching fire and gutting an entire house, something that has actually happened.

In the last National Day Rally – the one that he did not faint – our beloved Prime Minister painted a stark picture of the diabetes situation in Singapore. He encouraged everyone to go for regular medical check-ups, eat healthier, and to exercise more. (S Iswaran, are you reading this?)

The use of electronic bicycles, e-scooters and PMDs can remove the exercise component of our daily lives and take away what little chance there is of us being physical in a manner that can be beneficial to our health.

Some may think that it is necessary to make the first- and last-mile connections in our daily commute a convenient one, and some are conned into believing the government bullshit about the nation’s need to go car-lite,  hence the rapid growth in the use of electronic bicycles, e-scooters and PMDs, and lately of bike-sharing schemes.

But wheeling yourself to the train station or bus stop? Aren’t you just being frigging lazy? Moreover, the use of such devices run counter to the healthy nation we are trying to build. Instead it contributes to a more sedentary lifestyle and consequently may result in the exponential growth of illnesses related to such a lifestyle. What’s wrong with walking? What’s wrong with using your legs? Must you be “transported” everywhere you go? Did our government build all those “park connectors” for brain-damaged morons to ride these killer machines on? And in Singapore, everyone knows it’s more expensive to be sick than to just die. Yup, it’s cheaper to die – you do it once and you’re done with it. But if you get hit by one of these machines and become incapacitated for the rest of your miserable life, it’s an agony worse than instant death.

I see no reason to use any mobility device to move me from my house to the MRT station or bus stop and back, in fact, my walks to and from these places are very often the only exercise I get in the day, and despite excruciating pain from a bad back, I persist in walking and have learned to enjoy the walks and to benefit from what little exercise I get from them.

We all know already that electronic bicycles, e-scooters and PMDs often cause danger – and even deaths – to pedestrians, as statistics have clearly shown, and bicycles from bike-sharing scheme strewn all over the place are an eyesore. (Now that’s another story.) Is there really a need for us to promote the use of such devices just because they are trendy in some countries?