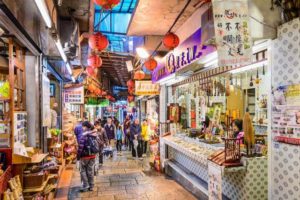 Taiwan, March 23rd. Our driver dropped us at Jiufen, a historical enclave about 40km away from Taipei, and told us to phone when we are done and he will come pick us up and drive us back to Taipei. The moment we exited the car I realized I have left my phone in it. But the driver has already driven off and so I chased after him but there was no way I could catch up. I walked up and down the crowded alleys of Jiufen looking for a public phone, an internet cafe or even somewhere to buy a cheap mobile phone. My plan was to phone my hotel and get the hotel to dial my phone, hoping the driver will answer. (I was not able to recall the driver’s phone number from memory.)

Among the throngs of tourists, I heard Singaporean accents and I spotted some Singaporeans a few moments later. Ah, fellow countrymen to the rescue at last, I thought. A fat, young man wearing a black t-shirt that said “REPUBLIC POLYTECHNIC” was messaging using his mobile phone. I approached him, identified myself and explained my dilemma and asked to use his phone to call my hotel. He looked at me, lied through his teeth and said “I have no signal” and walked away. Wasn’t that retard just using his phone to message someone a moment ago? No signal?

Meanwhile my 87-year-old dad – who did not have a phone on him – was hobbling with knee pain from walking along the sloping alleyways; and my own back was killing me too. (What else is new?) I eventually staggered my way to a post office, where an officer, upon learning of my plight, quickly called our hotel using his phone. I was able to speak to the hotel concierge and instructed him to dial my number.

It worked. The driver did pick up my phone, which was left in his car, received his instructions from the concierge and drove back to pick us up.

Everything happened within an hour but it was a tense hour of anxiety.

That was my adventure for that day. It was my mistake to leave my phone behind and not to carry a piece of paper with phone numbers on it but here’s another lesson learned: when you are in deep shit, you can always reply on a Singaporean to get you out of trouble. You won’t be disappointed. Someone please punch this fat motherfucking cum-gurgling useless wasted rectum parasite in the mouth already.

Blessed is he who expects nothing, for he shall never be disappointed. – Alexander Pope