Out of Stock Again? 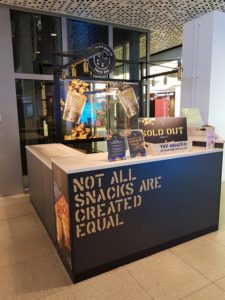 Out of stock again!

When McClelland Tobacco Company decided to close shop – citing a totally farfetched reason that only retards will believe – pipe smokers rushed to buy up all available inventory.

When they heard that Dunhill pipe tobacco will no longer be produced, pipe smokers went into a buying frenzy.

Of course, there are also the opportunistic ones who buy up a whole lot to hoard, hoping to sell later at higher prices.

Just like those who cash in on people’s appetite for rarely-released tobacco like Penzance and the now “extinct” original Balkan Sobraine.

Some fuckers are selling these for hundreds of dollars a tin.

There’s a sucker born every minute.

The best way to get rich is to create a product, release it in small batches and make “Out of stock” your default signage.

Then use a lot of publicity, even reviews by (possibly) fake reviewers, to say how great the product is.

Irvins salted egg snacks are masters of this technique; and copycat Golden Duck is following suit. Picture above shows a Golden Duck stall in the Jurong area.

Last week I walked away from a sushi place at International Plaza terribly disappointed.

I’ve been a regular customer since it opened five years ago.

Recently it closed for a month for renovation.

On re-opening day I was there with another regular. This guest of mine is not just another foodie crazy about Japanese food. He is a connoisseur of all things pertaining to Japan, someone who visits Japan several times a year and who has been to all eight geographical regions of Japan. This friend and I have spent tens of thousands of dollars at that restaurant since it opened – we often take clients there and host big dinner parties there. One reason is that the chef is able to converse in Chinese and our clients from China appreciate the banter with the chef in their own language.

Last week, we noticed that the sashimi pieces have been sliced to half their original thickness, while prices remain the same.

There is a standard that sushi chefs must adhere to as far as the thickness of sashimi slices are concerned.

In Japan, pulling such as fast one will immediately lead to a restaurant’s closure.

In fact, another diner actually left a scathing review online over the same issue.

When brought to the chef’s attention, he became defensive.

Less is not more here.

But what to do? Lots of morons who will never admit to their faults, will never apologize for their wrongs and will blame everyone else but themselves if things fuck up.

Resistance to constructive feedback will be their downfall.