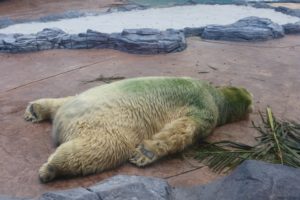 By the end of today, poor Inuka could be dead.

Inuka, the 27-year-old polar bear at our zoo is ailing and may be put down.

Today is supposed to be D-Day.

Inuka would be in his 70’s in human years, and I can’t help but draw parallels between Inuka’s life and that of human beings.

The rush to see Inuka one last time before he is gone forever is only human, but have we thought of visiting when he was hale and hearty? I for one have always told myself “He’s there and I can always visit one day.” Similarly, have we made efforts in our busy lives to spend enough time with our elderly relatives and aging parents or do we rush to make the obligatory visits only on special days like their birthdays, that is, if we remember at all? There are also too many stories of children rushing back from the four corners of the world to their parents’ death beds when they had not really bothered to visit when their parents were healthy or when they lived nearby.

Even under the best of circumstances, Inuka is a sorry sight to behold although he has outlived other polar bears in the wild by over a decade. His white fur is coated with green algae. He has ear infections and dental problems. His arthritis cannot support his 500kg weight. He has ulcerations on the pads of his paws and infection between his toes. In addition, he suffers from urinary tract infection and has urine burns due to his incontinence. Though his enclosure was built at the cost of S$8 million and is about the size of 2½ basketball courts and includes a large pool, waterfall and an ice cave, his enclosure is far from what a natural environment would be for a polar bear whose habitat is, well, in the polar regions. Inuka was born in captivity and is the sole inhabitant of that enclosure. He has never tasted freedom a single day of his life. Truth be told, he was just another pathetic exhibit at the zoo for visitors to ogle at.

Do we ensure that our elderly has a healthy social network? Let’s not imprison them mentally. Studies have shown that loneliness can be crippling. The golden years are losing their luster for a rising number of the elderly here, with more taking their lives in the later phase of life. According to SOS, older adults aged 50 and above accounted for 46% of suicides in 2016, with 197 deaths – a 19% increase from 166 in 2015.

Sure, let’s celebrate Inuka’s life but, a special day dedicated to the beloved bear, and postcards and other memorabilia, as someone has suggested, could only bring back memories. And memories will fade eventually. How much better it would have been if Inuka – like our parents and elderly relatives – are not just a background memory in our minds?