The social media explosion has resulted in people presenting their lives as “showreels.” Everyone can be someone now. Pathetic losers post pictures (99.9% Photoshopped to death) of selfies and wefies and boast about the exotic – to them, that is – places they visit, (my garbage dump may be their Waldorf Astoria, but so what, whatever floats your boat, mate), the Michelin-star meals they stuff their faces with – it’s all champagne and caviar, lobster and foie gras, glamor, glamor, glamor (translation: plastic, plastic, plastic.) How real is this? Do people live like that? Come on, even the Kardashians menstruate! (Not sure about that sick fuck stepfather of theirs, Bruce the retard, now known as Caitlyn after a sex change operation – “gender reassignment surgery” my big, fat, hairy Asian ass!) I resist bragging, but if you think about it seriously, who really wants to know about my slipped disc, my pain – excruciating pain that I suffer from, 24 hours a day, seven very long days a week – the deep disappointment I feel about certain people and organizations, the age spots on my face, my aching right shoulder, the calluses on my feet, my disillusionment with life, my anger, deep-rooted and unresolved, my rage, my anguish, my angst, my despondency and dispiritedness, my disinterestedness, my shattered dreams, my dashed expectations, my broken heart, my tortured soul and my melancholy?

(Met an old friend the other day and we reminisced about how time has passed us by. We are both 61 this year. When I asked if I look like a wizened old man, he said, “No, you look more or less the same, just a lot sadder.” Well, try smiling and acting cheerful when pain binds you 24×7.)

So, I make lemonade out of lemons, I try. Believe me, I try. And when the stars above shine on me once in a while, I too have a mini showreel or two to crow about, heh, heh.

Yes I did. Which leads me to another bird – one of the subjects of today – Peking Duck. 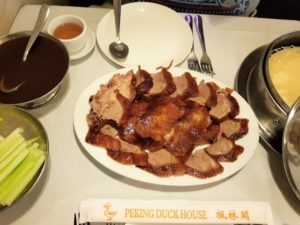 Air is pumped into the duck to stretch the skin, boiling water is then repeatedly poured over it. Next the duck is dried and rubbed with maltose before being roasted.

In my humblest of opinions, the best Peking Duck outside of Asia can be found at the Peking Duck House, at Mott Street. When I tell people that I eat Peking Duck in the US, they go like “Huh?” And that’s because they haven’t tried the Peking Duck at Peking Duck House. Unlike what is done in Asia, where the skin is eaten, then the meat; here, in New York City Chinatown, the chef slices the duck with skin attached and it’s always a wonderful taste sensation in the mouth to bite into crispy duck skin and fragrant duck meat wrapped in thin pancakes! Each bite bursts with flavor! My friend and I, just the two of us, ate one whole duck the other day. It was a lot of duck for two and as you can guess, we waddled out of that restaurant like, well, two fat ducks, of course!

Another place I always make it a point to visit whenever I am in New York City is Peter Luger Steakhouse. The picture below shows two of my favorite starters – shrimp cocktail and extra thick sizzling bacon. Yes bacon as appetizer! What decadence indeed! For many years, it was reserved exclusively for the waitstaff. A huge slab of cured pork belly was kept in the kitchen at all times; staff would slice off a hunk and toss it under the broiler. It was an easy thing to throw on bread during their lunch break.

The bacon then caught customers’ attention and became an off-menu sensation. Diners would notice the waiters munching at it and said, “We want that too.” Soon, it became a regular item on the menu and has been for over 20 years now. 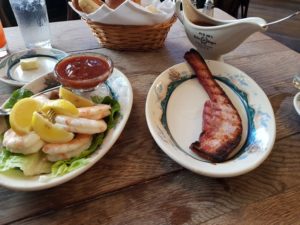 Jumbo shrimps and a thick slice of sizzling bacon.

The shrimps I had that night I visited were as always fresh and crunchy. In Asia we tend to refer to tiny little prawns as shrimps but it’s the reverse in the US, it seems. These are not tiny little prawns, but huge jumbo ones! And of course, their heavenly steak is a must. It is after all, a steakhouse! It traces its history back to 1887. The menu is simple: just tell the waiter if you want a steak (USDA Prime Porterhouse dry-aged inhouse) for two persons, or three, or four, etc. It is always done right and the restaurant has a Michelin Star. Be sure to have a drink first at the German beerhouse-style bar – the dry humor of the elderly barmen working there is legendary and drink portions are extremely generous. 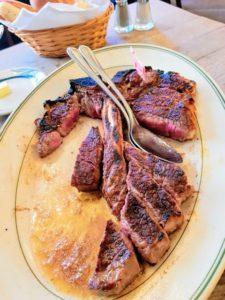 Wolfgang Zwiener, who worked at Peter Luger for 40 years has opened his own steakhouse at Robertson Quay, Singapore, called Wolfgang’s Steakhouse – not to be confused with Wolfgang Puck’s Cut at Marina Bay Sands. Prices at both restaurants are expensive as hell, but make no mistake, while imitation may be the sincerest form of flattery, there is only one Peter Luger! Nothing else comes close!

It’s one of those restaurants you must dine at before you die.