Pipe Making – From Ground to Mouth

Never in my wildest dreams did I thought I would be able to make my own pipes; but I did, after learning from masters when I went to Michigan and Chicago.

What made me do it?

I believe that the best way to appreciate something is to understand it. You can enjoy being driven in a Rolls Royce more if you know how it has been put together and why it’s so special. Otherwise, it’s just an expensive hearse-like heavy vehicle used to drive overweight tycoons around. 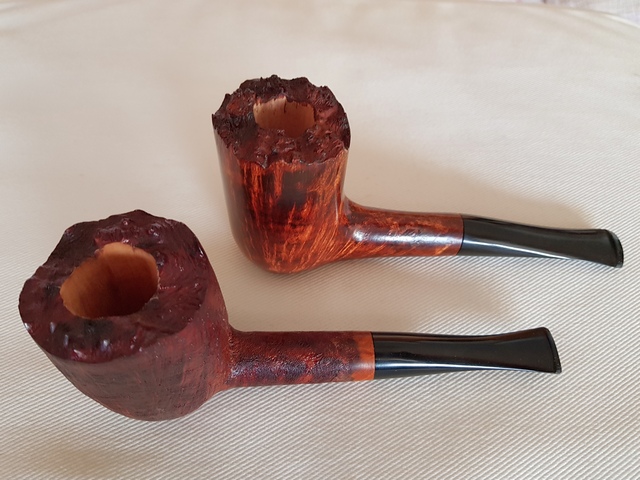 The finished products – I made the sandblasted one first (foreground), then the smooth one. Bear in mind that these are very amateurish attempts.

Briar burl wood is the wood that comes from tumor-like outgrouths that develop between roots and trunks of white heath small trees which grow in the region surrounding the Mediterranean Sea (Algeria, Greece, Italy and Spain), it grows generally in rocky or sandy soil on hillsides. It must be dug from the ground. 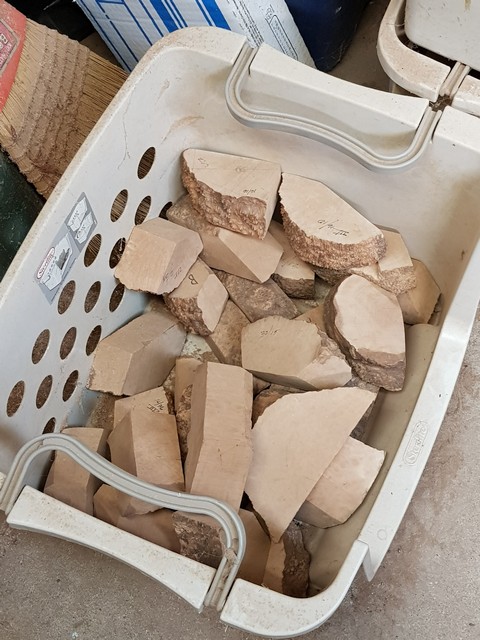 Briar blocks ready for use. 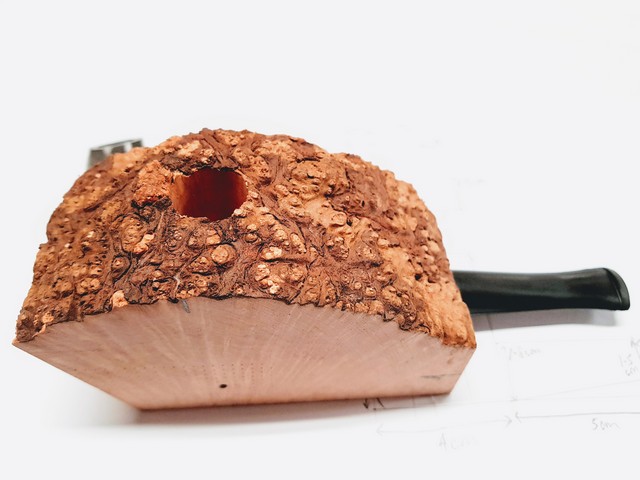 And now to turn this into a tobacco pipe. 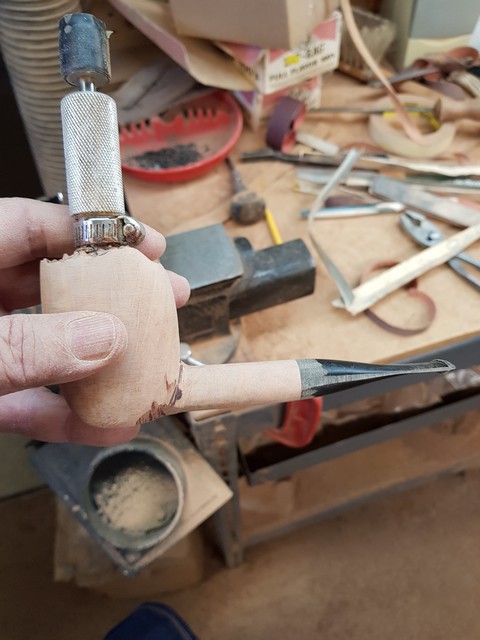 Infinite patience is required. But the masters who were so willing to teach had much greater patience than me – I was not a good student at all. 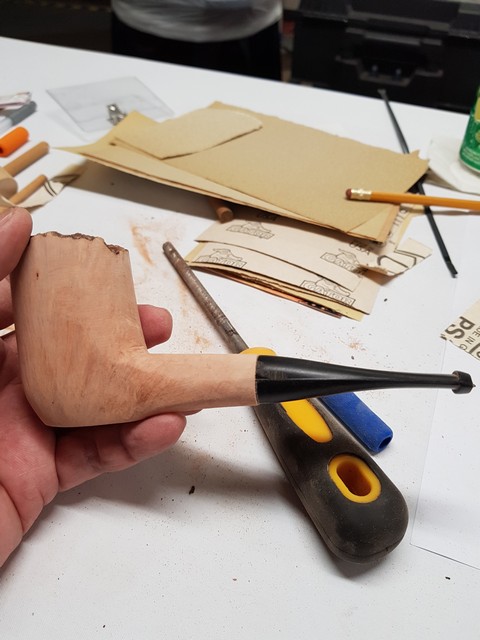 Almost there after copious amount of time spent shaping, and sandpapering. 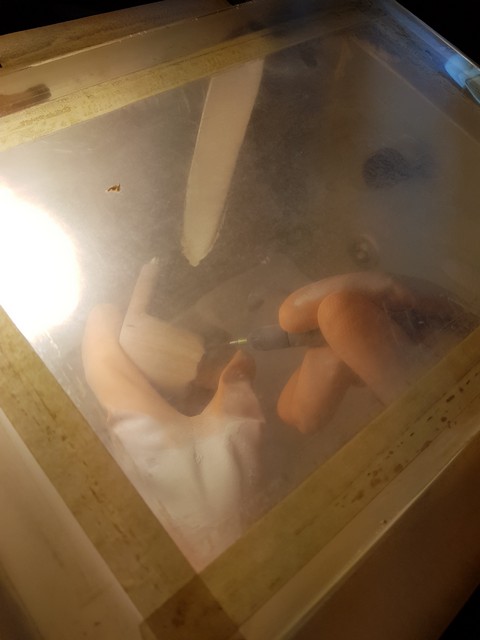 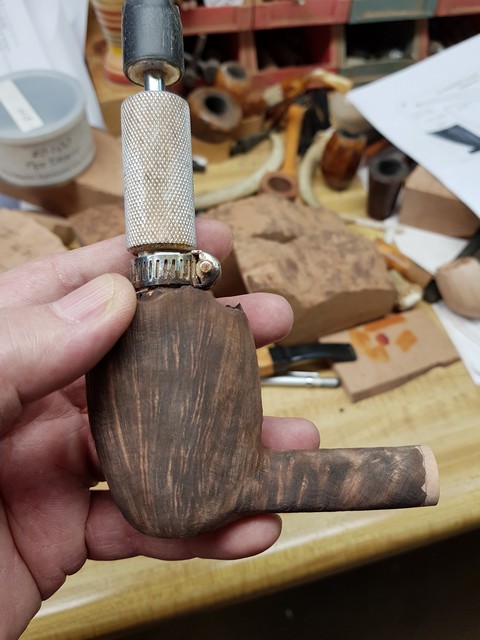 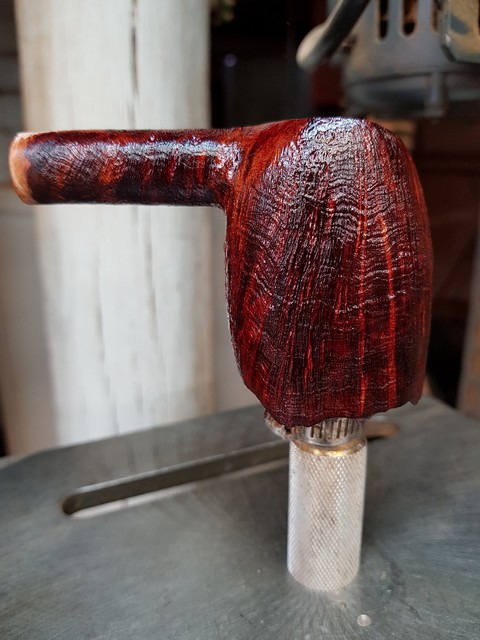 Drying after a coat of shellac. 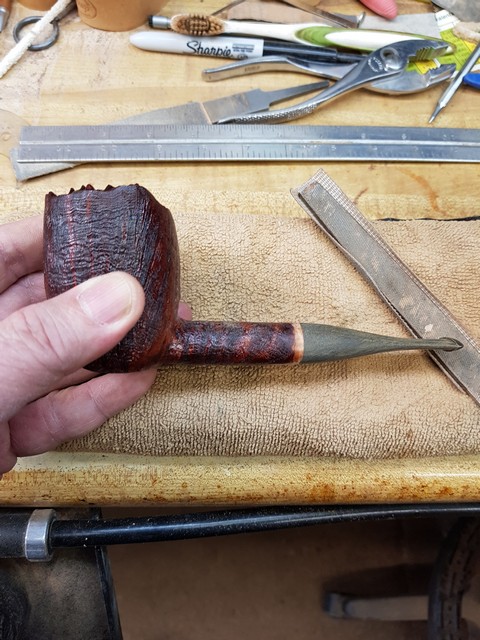 Now, to work on the mouthpiece. 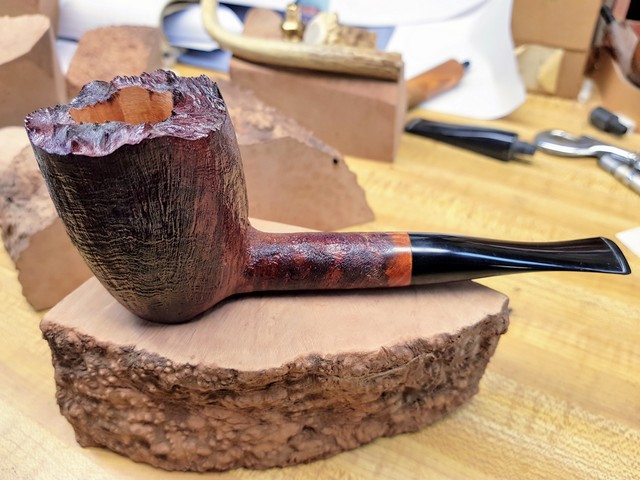 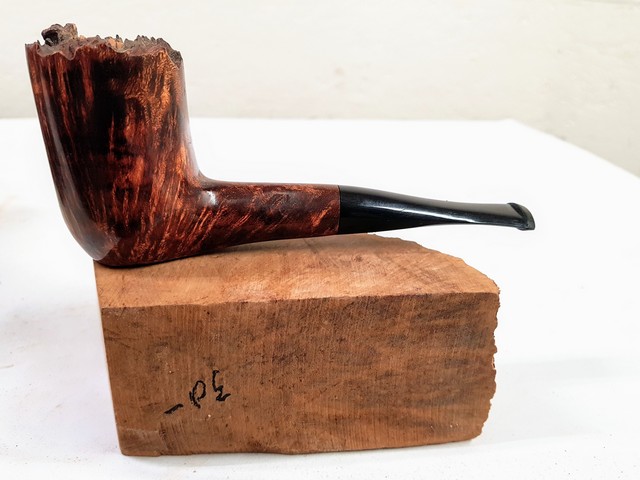 Pretty much the same process went into the making of my second pipe, except for sandblasting and shellac application. 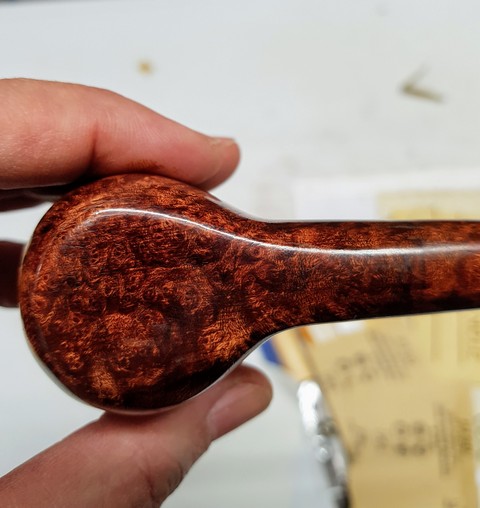 Look at that bird’s eye grain!

Heartfelt thanks and eternal gratitude to master pipe makers Lee von Erck, Jeff Gracik and Ernie Markle – geniuses all and all so willing to teach and share.

Their behavior and attitude contrast greatly with some of the pipe makers from mainland China whom I’ve met. Many of these Chinese pipe makers think that just because their pipes are being sold by smokingpipes.com they are now world-class maestros. Well, I have news for you, Ah Tiong! Smokingpipes.com’s highest profits are from tobacco and the handiwork of new pipe makers are often listed simply because Sykes Wilford needs to show that just about all the pipes being made in the world are available on his site. Also, it’s now almost a must to get caught with China fever, with even some Hollywood movies intentionally including stuff that are Chinese such as locales and the inclusion of Chinese actors and actresses, or entire segments in a movie filmed and screened just in China. Well, the Chinese market is simply too large to ignore, with lots of wealthy Chinese with dubious sources of cash buying up just about anything and everything that are expensive – from wines to cigars to watches and yes, pipes. But just because your pipes are being sold on smokingpipes.com doesn’t really mean much. Just look at what’s being sold on the site – you’ll find lots of crap there along with the masterpieces.

Many Chinese pipe makers obviously think the world of themselves, despite the fact that nothing they make is original or unique but are all copies, mainly of pipes made by Danish pipe makers. One or two are genuinely talented and deserve to be well compensated for the care they put into what they create, even though they are still copies of Danish styles. Others are just retards with an overestimation of their own worth. Just look at the prices of the pipes these deluded jokers make. Do they deserve to command such high prices? I bet even the Chinese collectors don’t buy the pipes made by their own countrymen. I for one will pay several thousands of hard-earned cash to a pipe maker I deem truly deserving and I have done so in the past. I know what I’m talking about – you should see my pipe collection! A few of the most expensive pipes I own cost well over several tens of thousands of US dollars. In any case, price doesn’t always have anything to do with the value of a product.  I’m sure we all know of idiots in our lives who know the price of everything but the value of nothing. Yup, you can wear a 5000-dollar tuxedo and sit in a 500-dollar box seat at the Bolshoi and fall asleep with your mouth opening and drooling like a moron. You can sit at the very last row of the cheapest ticket section with your oxygen mask and a catheter sticking out of your dick and still have a great time with a telescope in your hands. Pipe makers who overestimate their so-called talent and creativity don’t impress me. Worse, I actually met a couple who exhibited an attitude that says “I am the greatest pipe maker in the world.” Oh really? No shit! These asswipes make me sick to the bone.

I don’t care if you are from China or Russia or Denmark or wherever. Also, it means zilch to me if you are the descendant of a legendary pipe maker. So what if your great grandfather was famous for making nice pipes? Fuck you! Unless your work supersedes your famed ancestor’s, to me, you are just a wannabe hanging on to his coattails and you should get a real job for a change. In my opinion, pipe makers like you and those who behave like pricks are just like boors who trot out what little know-how they possess like pet pigs on diamond studded leashes.

They should know their place.

Don’t expect a collector with 5000 of the world’s most exquisite pipes to kowtow to you.