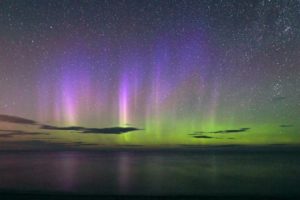 The Northern Lights over Lake Superior on August 4th 2010 in Marquette.

Some weeks ago, I flew from Singapore to Hong Kong, Kong Kong to Narita, Narita to Chicago and then from Chicago to Marquette, Michigan, to visit a dear friend, a world-renowned pipe maker, whose masterpieces command four-figure prices.

I spent a week in Marquette. 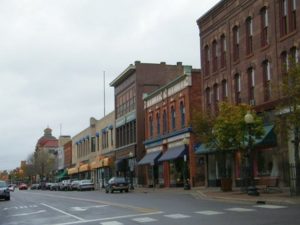 Marquette, sometimes referred to as a “university town” – the University of Northern Michigan is there – has been listed among the 10 best places to retire in the US by CBS MoneyWatch.

When I was there I came across a souvenir store selling products from Finland.

Then I realized that the lovely place (population about 20,000) has strong Finnish and Scandinavian roots due to the influx of Europeans who flocked to work in its iron mines and lumber industry in the past.

A bit of geography lesson here: Two major peninsulas make up the state of Michigan. They are connected together by the Mackinac Bridge

Marquette is a city in the Upper Peninsula. 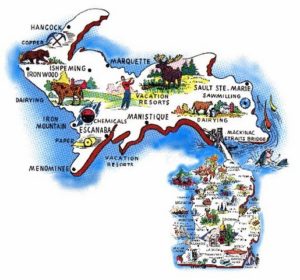 Residents in the Upper Peninsula are frequently called Yoopers (derived from “UP-ers”) and have a strong regional identity and lingo unique to the area. Other than the large numbers of Finnish immigrants, the French, Canadian, Swedish and even Cornish and Italian immigrants also descended onto the Upper Peninsula in the past in search of a better life.

The European influence worked its way into many aspects of UP culture, and one of the most interesting is pasties, a Cornish tradition. A pasty is more than just a meat pie. I know. I ate two for dinner (called “supper” one evening.) One of these savory turnovers – spiced with salt and pepper and stuffed with beef, potatoes, onions (and sometimes rutabaga or carrots; which vegetables are included is hotly debated) – is filling enough for two meals. (And I ate two!) How did they taste? Well, a bit like eating two giant Old Chang Kee curry puffs, minus the curry flavor. 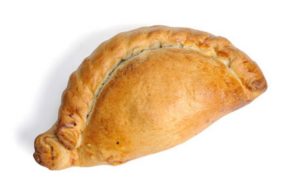 Here, let me share some of my observations about Yoopers and what I’ve gathered from doing some basic research (translation: a wee bit of plagiarizing) online:

Yoopers can withstand real intense winters. Winter there can be an eight-month season. In fact, I’m sure Yoopers can easily survive the next Ice Age! The hottest it ever gets is like 20+ degrees Celsius. 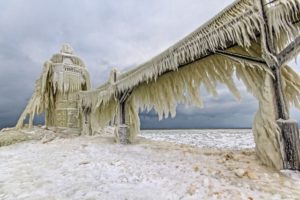 This is the meaning of “winter.”

So, Yoopers find all sorts of ways to wait out the weather.

From warming up in traditional Finnish saunas – pronounced “SAO-nah” there, and not “SAW-nah” –  to making up new rules for bad-weather driving, Yoopers find creative solutions to get through the cold winter.

Henry Ford once said the Upper Peninsula is “one of the prettiest places on earth.”

Yoopers are also hardcore hunters, in fact, the first day of deer-hunting season is considered a holiday and schools have the day off.

The wonderful town of Copper Harbor is only three hours away from Marquette. Great local beer, good ambiance, and respectable food (fish from local waters) can be found there.

Copper Harbor is also the gateway to Isle Royale, one of the nation’s most remote and least visited national parks complete with wolves, moose, and rare orchids, according to a good friend who has biked there.

Anyway, not only are Yoopers well prepared for long winters, they keep in good spirits about it. In fact, they’re good-natured about most things. I have not met a single person who was unfriendly throughout my stay there.

But the stereotypes about Yoopers aren’t all true.

Yooper stereotypes revolve around not-too-bright hicks who love to hunt and drink and not much else. In fact, the peninsula is full of culture. In Marquette, you could spend a day shopping at stores big and small, picking up groceries at owner-managed stores or at big chains like Walmart – I bought two pounds of minced bison for making into patties that my friend grilled – super delicious! – checking out galleries, getting a vegan meal, bar-hopping between several microbreweries, going to a show at a lakefront theater and ending with a walk along the water. Not exactly backwoods. 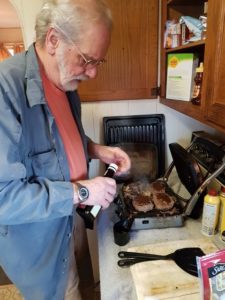 Bison patties on the grill.

It’s a place I could retire to. Marquette is also CNN/Money Magazine’s 2011 best place to retire in the United States. 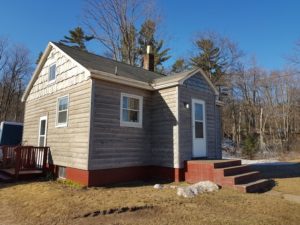 My friend’s house in Marquette. 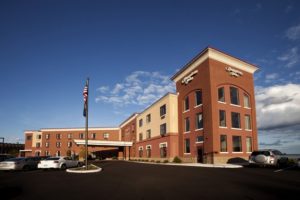 The hotel I stayed in. But my friend’s house is cosier.